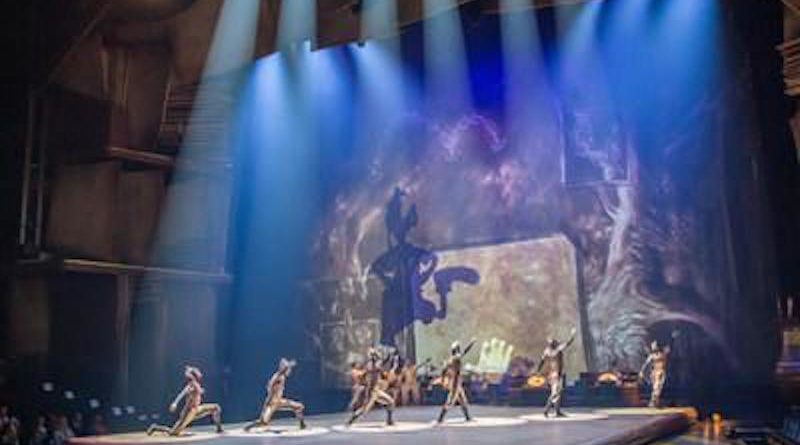 After more than a year of waiting, Cirque du Soleil Entertainment Group and Disney Parks, Experiences and Products are excited to announce that Drawn to Life is scheduled to open on Nov. 18, 2021. The new family-friendly show coming to Walt Disney World Resort in Lake Buena Vista, Fla., is a collaboration between Cirque du Soleil, Walt Disney Animation Studios and Walt Disney Imagineering and will take residency at Disney Springs.

“We are so looking forward to unveil this beautiful, long-awaited creation to the public,” said Daniel Lamarre, President and CEO of Cirque du Soleil Entertainment Group. “We were moments away from opening night in March of 2020 when performances were paused. Intermission is now over and we cannot wait for Cirque and Disney fans to experience the joy of this love letter to the art of Walt Disney animation.”

“With its combination of Disney animation and awe-inspiring performances, Drawn to Life is a great addition to the Disney Springs entertainment lineup and perfect for all ages,” said Jeff Vahle, President of Walt Disney World Resort. “I’m excited for a new generation of guests to experience this show as part of their Walt Disney World vacations.”

Drawn to Life,written and directed by Michel Laprise with Fabrice Becker as Director of Creation, is a live acrobatic journey telling the story of Julie, a determined girl who discovers an unexpected gift left by her Disney animator father: an unfinished animation. As she dives into the inner world of animation guided by a surprising pencil, Julie embarks on an inspiring quest filled with her childhood Disney memories. Developed in partnership with Michael Jung, Executive Theatrical Development, Walt Disney Imagineering, the story is driven by 10 unique acrobatic acts alongside animation from beloved Disney films as well as all-new animation created by Disney artists led by Eric Goldberg, best known for characters such as the Genie in the animated classic, “Aladdin.”

“It was an honor to have the opportunity to interpret the spectacular works from Disney’s catalogue of animation into a live show and we couldn’t be more proud of this production,” explained Diane Quinn, Chief Creative Officer Cirque du Soleil Entertainment Group. “Together with Walt Disney Animation Studios and Walt Disney Imagineering, we have created a stunning show that will inspire audiences to dream and reach for the impossible.”

“Cirque’s world-class creative and production team worked closely with us, getting to know and understand every aspect of Disney,” said Natalie Woodward, Vice President of Production, Disney Live Entertainment. “Our incredible collaboration on Drawn to Life has created a show that celebrates Disney’s legacy in the art of animation in a unique and signature style that is pure Cirque du Soleil.”

“I think guests will be amazed to see how the magic of Cirque du Soleil and the art of Walt Disney Animation Studios have come together to bring life to classic and current characters like Baloo, Baymax, and Cinderella in ways that no one has ever imagined,” said animator Eric Goldberg.

About Disney SpringsDisney Springs is a one-of-a-kind retail, dining and entertainment district located in the heart of the Walt Disney World Resort in Florida. With its namesake springs, beautiful open-air promenades and lakefront setting, Disney Springs evokes the charm of Florida waterfront towns at the turn of the 20th century. It’s also home to a collection of more than 150 shops and restaurants, including top-name retail brands, specialty boutiques and dining experiences created by celebrity and award-winning chefs. Located in Lake Buena Vista, Fla., Disney Springs is open daily.

About Disney Parks, Experiences and ProductsDisney Parks, Experiences and Products brings the magic of The Walt Disney Company’s powerful brands and franchises—including Disney, Pixar, Marvel, Star Wars, ESPN, 20th Century Fox and National Geographic—into the daily lives of families and fans around the world to create magical memories that last a lifetime.

When Walt Disney opened Disneyland in Anaheim, California, on July 17, 1955, he created a unique destination built around storytelling and immersive experiences, ushering in a new era of family entertainment. More than 65 years later, Disney has grown into one of the world’s leading providers of family travel and leisure experiences, with iconic businesses including six resort destinations with 12 theme parks and 52 resorts in the United States, Europe, and Asia; a top-rated cruise line with four ships and plans for three more; a luxurious family beach resort in Hawai’i; a popular vacation ownership program; and an award-winning guided family adventure business. Disney’s global consumer products operations include the world’s leading licensing business; the world’s largest children’s publishing brands; one of the world’s largest licensors of games across all platforms; Disney store locations around the world; and the shopDisney e-commerce platform.

About Walt Disney Animation StudiosCombining masterful artistry and storytelling with groundbreaking technology, Walt Disney Animation Studios is a filmmaker-driven animation studio responsible for creating some of the most beloved films ever made. Located in Burbank, WDAS continues to build on its rich legacy of innovation and creativity, from the first fully animated feature film, 1937’s Snow White and the Seven Dwarfs, to its upcoming 60th animated feature, Encanto. Among the studio’s timeless creations are Pinocchio, Sleeping Beauty, The Jungle Book, The Little Mermaid, The Lion King, Frozen, Big Hero 6 and Zootopia.