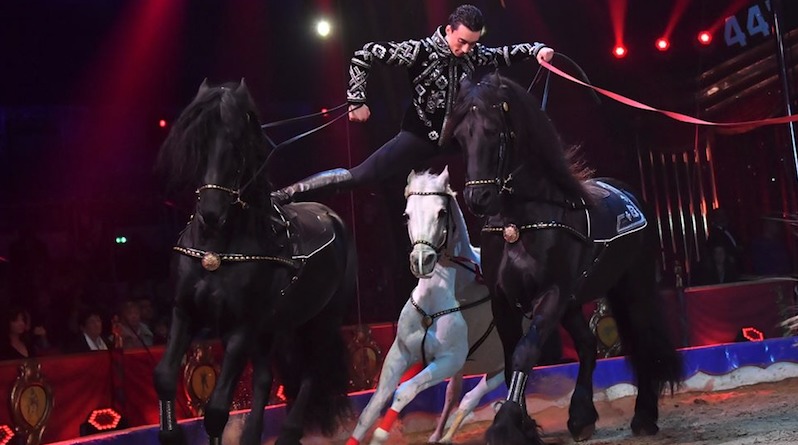 The quality of dreams…

Escaping notions such as “traditional” and “contemporary,” the world’s oldest circus festival shows the way to a modern, popular circus that is still lavish in thrills and danger.

From a fugacious, raw miracle such as a quadruple somersault, to the more crafty and persistent breeze of thirty horses glowing in the dark, the Monte Carlo Circus Festival seems to guarantee Hemingway’s definition of circus: “The only spectacle that, while you watch it, gives the quality of a truly happy dream.”

Perhaps because this Festival was conceived by a prince, or perhaps it is from the royal spirit of the travelling dynasties each year, the crowds still gather here in thousands. The Festival, in its  44th year of existence, flamboyantly keeps the fairy-talesque aspect of circus imagery alive.

Neverthless, the Monte Carlo Festival can be far less conservative than it first appears to be. Tradition is the capacity to consolidate through time some aesthetic styles or practices; contemporary is the ability to tune in with one’s own times. It takes real talent to present both simultaneously–and it is even more demanding to transcend these theoretical classifications in order to appeal and surprise, thus generating beauty.

Are forms of “modernity” hiding behind the clichéd definition of “traditional circus”? Assuming as premise that this is a world ofcircus acts as classic creative entities, the related industry and audience (a galaxy away from the similarly volatile notion of “contemporary circus”) reveals indeed, in the best cases, circus has an  aesthetic ability to shape and apply its ancient codes to actual times.

Neoclassic Modernity From Animals to Acrobats

Take, for example, the Knie family, one of this year’s three “Golden Clown” winners, and the most massively represented company in this edition (four acts, more than fifty horses brought from the Alps to the Riviera along with dozens of grooms). In 2019, they celebrated 100 years of their Swiss National Circus, and brought to the festival their 8th generation (!) of blue blooded sawdust. An unaware observer, wrongly assuming that such an enduring family devotion to the art would generate predictable equestrian obsolescences, would find here four pure gems of neoclassic circus art. The painstakingly arranged original music scores, balancing big band and electronics; the centuries-old experience of horse training becoming pure choreography by bravely breaking codes, rhythms and habits; the surprisingly inspired light design; the fresh allure of Knie’s young generation: Ivan Knie, Michael and Wioris Errani; and, humbly behind them, gently retired in the shadows, Frédy Knie, one of two or three of the greatest living circus horsemen.

The same can be said for the surprising Sergei Nestorov from Russia: five white tigers were part of  the best esthetically conceived cat act in decades. There were no bars or steel in view, but a thin net around a ring covered by an immense blue plush carpet. The bare feet of the whipless trainer and the soft cats’ paws gently revolving to a new age music score, in the theatrical elegance of the empty space. Their natural relationship sublimated in pure dramaturgy (Silver Clown).

A neoclassic resisting trend in circus arts is the Ukranian/Russian school. The Bingo company from Kiev best represented that in the last two decades, regularly with one foot inkitsch and the other in effective, fast-paced acrobatic choreographies, with a class of performers equally well-versed both in pop dance and in top level acrobatics. Their most acceptable piece in Monte Carlo (Silver awarded) was a metal-rock inspired choreography merging Chinese poles and hand balancing. Russia’s jumping Troupe Efimov (Silver) once more confirmed the directorial skill of veteran Alexander Grimailo, in the classic lineage of circus director/choreographers. And another glimpse of pure new circus  was due to Germany’s Lisa Rinne creation on swinging trapeze. Of equal artistic interest were the imaginative prop of Russian hand-balancer Maria Saratch and the choreography of the “Flash of Splash” Ukranian aerial duo. Through the remarkably dangerous acrobatic grammar of new teeth-to-teeth suspensions, they added new twists to the genre. And this drives us to the second aspect of this edition.

Thrill is of course another resisting aspect of classic circus, massively represented in Monte Carlo as rich in bizarre novelties. As is the case of the Martinez bros. risley act: if not remarkable for theirmise en scéne, nothing but awe is left for their 52-flips sequence above a lifted platform dangerously moving down from the height of 13-meters. It was mainly this crude trick, historically unrecorded, that won them a Golden Clown. The same honor was bestowed upon the Flying Tuniziani: their regular quadruple (circus history’s Grail) was remarkably enhanced by a double-catcher display, gently served to the  audience as a rich assemblage of their aerial repertory. A good high wire act is always welcome: the fast, Latino-dancing Ayala troupe (a family raised in the air is a nice diversion from the somehow static trend of cycling pyramides). Here, with their joyful connection to the audience (mostly due to their amiable clown leader Henry) and the novelties in their repertory, of truly demanding tricks, they fully deserved the Silver Clown. Speaking of thrills, we saw a seven-high from a teeterboard by the massive Zola Troupe from Mongolia (Bronze). There was the Chinese intricacy of Shandong’s acrobatic troupe (Silver clown), three acts bringing not less than thirty artists to fill the ring: a polished hat juggling Michael Jackson inspired choreographic display; a jumping rope act, and one of the largest spinning plates presentations ever seen. A marvel  both in skilled performance and dancing grace was displayed by the Swiss-Russian Trio Dandy’s at the Russian bar (Silver).

Another dozen or so colorful and quality acts contributed to the two selections of the  show (each one about 4-hours of joyous,dense circus rich in pageantry and grace). A well selected jury was led by Princess Stephanie: her consuming love for the circus is the main reason for the Festival being so enduring, so well supported by the titanic experience of Urs Pilz, the Festival director. It was nice to remark on the jury panel Kristian Kristof from Hungary: a man well-representing the best thread between “classic” and “modern”: thus symbolizing, as the Festival itself, how a transversal way is possible to show that circus can be at the same time popular and fully actual: when theatrically original, even in the old short form of the act, without need of existential subtexts to be considered a legitimate contemporary art form. As a recognized historian, he authored seminal books and papers in seven languages, teaching and lecturing worldwide. His book of circus history “Storia del Circo”, in Italian, is considered the most extensive reference text by most international historians. Raffaele is also one of the authors of Circopedia project. He is custodian of an extensive private circus collection, with pieces dating from XVth century, and seated in the Performing Arts Council of Italy’s Ministry of Culture. www.raffaelederitis.com
Raffaele's profile
You are about to enter a members-only zone.
To share this article on your CircusTalk member page and connect with circus professionals from all over the world, sign up now. It's free!
Sign Up
Already have an account?
Log in

Raffaele De Ritis, among the pioneers of circus creation by the late 1980s, wrote and directed shows for the world’s leading companies, including Disney, Cirque du Soleil, Dragone, Ringling bros., Big Apple Circus. Beside his main creative work, he directed major performing arts festivals and consulted for hundreds TV specials. As a recognized historian, he authored seminal books and papers in seven languages, teaching and lecturing worldwide. His book of circus history “Storia del Circo”, in Italian, is considered the most extensive reference text by most international historians. Raffaele is also one of the authors of Circopedia project. He is custodian of an extensive private circus collection, with pieces dating from XVth century, and seated in the Performing Arts Council of Italy’s Ministry of Culture. www.raffaelederitis.com