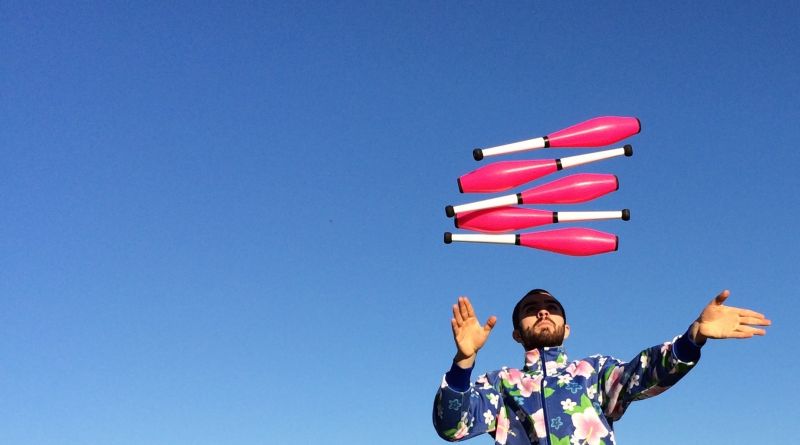 My 17-year-old son had just returned home from the European Juggling Convention where he was fortunate enough to see many of his idols perform, and even to meet a few of them. After he described a kindly encounter at the airport with his favorite juggler of all, Wes Peden, he told me that he wanted me to watch Peden’s new video Gumball. It was an hour of self-produced juggling adventures by one juggler who has been known to push the bar. But a whole hour? In the end, I sat down with him to watch it because I knew juggling was a topic over which we could both rejoice, and as we settled in, I realized that an hour was hardly enough time to contain the awe, surprise and glee we would feel as we watched each act of the video unfold.

Yet what a contemporary approach for marketing one’s skills– a video full of inspiration that could be purchased for 15 euros by juggling nerds across the globe. Peden himself admits it was the culmination of a lot of time and energy with this simple rubric: 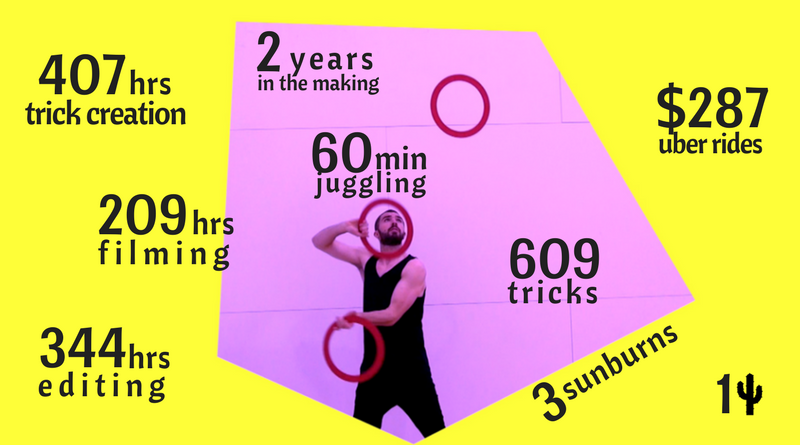 Peden often allows his sense of humor to permeate his work, which helps his juggling come across with a sense of joie de vivre. You can sense that he considers himself privileged to have the life he does. For example, here is how he describes his video “Gumball is 60 minutes of Wes pushing his dyslexic brain and donut filled body to the max to do tricks that will still be cool when Kanye is president. Many have said that the video looks like what would happen if a trapezoid and a hoverboard had a baby and read it bedtime stories about siteswap.”

Peden’s reputation as something of a rock star in the juggling world does not come undeserved. He has managed a feat that none from generations of jugglers has ever really mastered–he has made juggling look cool for the masses. Using vibrantly colored props, often dressing to match them and seeking out striking locales for his videos where he performs tricks that seem impossible–he has raised the bar not just for juggling skill, but also visual production value. He has worked with the best in the industry and undoubtedly he will continue to set trends and influence the craft of juggling with his boundary pushing style. All of that, and he is a juggler’s juggler too. Peden was voted World’s Most Popular Juggler 7 times on Luke Burrage’s eagerly awaited Top 40 Jugglers poll. He holds a handful of world records and even more awards. But the real charm to him, beyond his obvious skill and creativity with juggling, is his self-deprecating humor and down-to-earth nature, which is somehow made more engaging by his quirky fashion sense. Here is how Peden described himself, his likes and dislikes and daily habits in our recent interview:

Any trick that I think is going to look cool but ends up looking lame.

Favorite country to juggle in?

Iceland for the inspirational landscapes and all the cool artist there. Japan for the energetic nerd jugglers.

When I was 10-20, I juggled between 5-8 hours per day. I still love to juggle as much as I can but these days a lot more time goes into composing shows, editing videos, and answering questions for Circus Talk. I probably average 2-3 hours per day now.

Having all my fingers fall off into a volcano.

What you say to fans?

I usually say ‘’Hi!’’ and give high 5’s when it feels appropriate.

What you tell new jugglers?

If they ask for advice, I say to figure out why they juggle so if someday they wake up and it doesn’t seem fun you can remind yourself why you do it. Also, make sure your throws from the left hand are high enough.

Most fun thing to juggle?

Best part of your job?

The feeling of inventing a new trick that looks cool!

Worst part of your job?

Dropping a trick on stage that I can do perfectly 100 times in a row during practice.

Music you are into?

When I’m a good human, I run and jump rope but most of the time I just make sure I do some juggling that gets me sweaty.

Jay Gilligan! Jay was my head juggling professor at circus university in Stockholm. He taught me basically everything I know. He still gives me great advice on every project I do. He’s a genius!

Florence Huet. She’s a great hoop juggler and crushes me at Mario Cart.

Fashion magazines, music videos, NBA highlight reels, but mostly when I have a new juggling idea that I’m excited to try out!

Doing a lot of work on something that ends up feeling useless, not having a good space to train, emails, and trying spell corektly.

Artists that work their asses off.

I don’t know! I just try to make stuff that no one else does so if people want a juggling show or video like mine I’m the only place they can get it.

Do you have any hobbies?

I know this sounds boring but juggling is both my work and my hobby. I could say filming/editing or buying weird clothes but I only film/edit to make juggling videos and I only buy weird clothes because it makes my juggling look better. Everything I do fits into my juggling.

How many days spent on the road?

Probably 4-5 months in the year.

I have a cactus!

Weirdest thing you have autographed?

Right now there’s nothing I’d rather be doing than making juggling shows and videos. I’m very fortunate that I get to work on many different projects throughout the year. I perform full shows as a trio, a duet, and a solo as well as performing shorter acts as a part of other shows. Last year, I did an act in a Finnish opera where I was dressed as a bullfighter and had acrobats dressed as bumblebees for assistants! Having a job that’s always changing leaves very little time to get bored. In the future, I would like to work more as a juggling choreographer and director.

What is next for you?

Right now I have one month of residency in Stockholm where I’m working on my solo show Zebra. I’ll be performing that in Germany, Finland, and Belgium in October! You can see details about that show on my website.