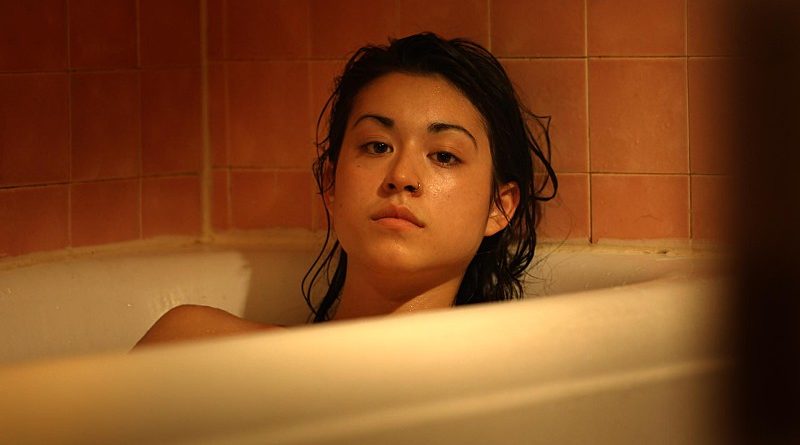 A gorgeous new documentary provides a glimpse into the lives of eight circus artists around the globe.

The eight circus artists profiled in Grazing the Sky come from all over the globe. They appear at different stages of their careers, from students just entering circus school to seasoned veterans retiring after years on the road. They’ve made very different choices about what to do with their skills, ranging from teaching circus skills to deaf and abused girls in Palestine to starring in Cirque du Soleil productions. They don’t know each other, and their stories never connect. What they share is that while none of them come from circus families, they have all developed a passionate dedication to their art, the art of circus.

In 2004, aspiring filmmaker Horacio Alcalá didn’t have enough money for film school so he got a job to raise money for tuition. That job, as a production assistant on Cirque du Soleil’s Dralion, wound up changing the course of his career. He toured for six months and then for the next seven years alternated between working and attending film school in Berlin and Venice. By the time he graduated, he knew he wanted to include circus in a film somehow, so he returned to Cirque du Soleil until he felt he understood enough of that world to begin conceptualizing a project.

After finishing school, Alcalá began working, creating short films and documentaries, most notably 2009’s User Manual for a Spaceship, a full-length documentary about how the impact of climate change on Spain’s four most important agricultural crops. The film was shown in festivals in Asia, Africa, and Europe and won awards including best documentary film at the Pamplona International Film Festival and the People´s Award/ CINESTRAT in Valencia, Spain. Alcalá continued to travel the world making more connections in the circus community. He estimates he attended hundreds of circus performances, including professional shows and a circus school graduation presentations, looking for artists who inspired him: “I paid attention to acrobats to see if they were interesting. Through the act, I know about the personality.” Of over 80 artists considered, he narrowed his selection to eight. Although he wasn’t looking for a particular genre of performers, he didn’t find any clowns or jugglers that appealed to him. The eight are all primarily acrobats, although Alcalá chose them for their stories, not because of their choice of discipline. Alcalá explains his process: “I started to meet people and didn’t want to look for anything specific—not the best acrobats or the best stories, just stories that connected to me.” In fact, he says, these eight people represent different aspects of his own life. Perhaps leaving these connections unspoken in the final film allows viewers to find their own affinity to the performers.

Filming took five years and ranged across eleven countries. Alcalá says his initial impressions of the artists were confirmed, but the stories took their own turns over the lengthy course of shooting. For example, one performer was seriously injured. The act, a duo, didn’t know whether they’d be able to continue working, and they suspended filming for a period. Alcalá was particularly interested in the relationship between the two partners, who, while not a romantic couple, frequently spend 24 hours a day together and depend on each other so literally. Other stories are compelling for other reasons. A student muses on her life before circus. A Cirque du Soleil acrobat wonders how his family will adapt to life after circus.

Although all the subjects are circus performers, Alcalá insists that the film is not about circus: “It’s about humans. I have no idea about circus.” So why did he choose these subjects? “Circus artists are very humble compared to dancers, for example. They need more patience and training than artists in other disciplines. I looked for two years for answers to ‘why you do what you do?’ but couldn’t find answers to these simple questions. The film is about ordinary people doing extraordinary things.” An interesting thing about the film is that it refuses to bend to the restrictions of conventional documentary or narrative structure. The artists speak for themselves without an omniscient narrator, and their stories never resolve or converge. Alcalá edited the stories separately before splicing them into one movie. (After five years of shooting, Alcalá was so certain of what he wanted that the entire editing process took less than three months.) Although common themes emerge, for example the difficulty of discipline, the risk of injury, or the challenges of dealing with family, the performers deal with them in totally different ways. One performer recognizes his children’s joy in stability and gives up his career for their happiness; another describes his parents’ gradual acceptance of his career choice, an ongoing conversation that reminded Alcalá of his relationship with his own parents, farmers, when they learned he wanted to make movies.

Another impressive thing about Grazing the Sky is the gorgeous and compelling footage of the artists at work. Kudos to cinematographer David Palacios. Besides showing the performers training and performing in shows, Alcalá created and directed special routines. Some of these were presented publicly, including a vertical dance with four performers suspended on the side of a building and a Chinese pole performance in an outdoor square in Turin. Others focus exclusively on the performers, in unusual or isolated settings. Acrobats in Cyr wheels spin against a plain white background, on a glass floor, through an enormous building lobby, and even under water. Artists balance and interact in an abandoned stone building in Jerusalem and near a river in Jordan. The camera lingers on close-up shots of a flyers’ hands finding his catchers’ wrists. While many traditional documentaries strive to maintain a level of objectivity, passively showing their subjects without engaging them, Alcalá describes these scenes as a collaboration between himself and the artists. For the scenes in the abandoned building, for example, he says, “we were looking for figures, and then we made a game with the shape of their bodies to connect with the place, something static to represent the beauty of circus with their bodies.” He connected one of the performers to a group of three others, and led them in partner trust games, which appear in the film, as the performers prepare a new routine, which Alcalá created.

So far, Grazing the Sky has been shown at over 25 festivals around the world. After each screening, Alcalá says, audience members thank him for showing them what contemporary circus is. Apparently, that image was missing from the film industry. In fact, when Alcalá was trying to raise financing for the project, he found investors to be wary of the topic, as they could only imagine traditional circus with animals or Cirque du Soleil and weren’t interested in producing a movie about either subject. He wound up co-producing the film with a friend, and he also received support from Ibarmedia Mexico, which works for collaborations among Latin-American countries, Spain, and Portugal, and the Spanish Ministry of Culture. Alcalá is Mexican but has lived in Spain for over a decade. He says the European Federation of Professional Circus Schools (FEDEC) was also extremely helpful in helping him make circus connections and supporting by the production.

After eight years involved with the circus industry, both working for Cirque du Soleil and shooting this movie, Alcalá still says he is just a filmmaker who is interested in good stories, but when asked whether he’ll be moving on to a non-circus topic, he demurs: “Circus is like the mafia,” he says, “how do you get out? Even if you quit your job, your friend is still in the show, so you go to see it.” Plus, as a filmmaker, he hasn’t exhausted circus as a subject: “I’m visualizing more and I want to explore more the concept of circus as a landscape, as a canvas for my next project. I’m writing a script of a love story, but it’s set in a traveling circus.” While he’s adamant that the focus of the movie will be the love story, circus won’t just be a backdrop either. Some of the plot will be shown through circus movements, and the action will take place as a road movie, with performers setting up a tent in each location, probably in Spain and France. This would be his first full-length narrative feature. Grazing the Sky is available with English, German, French, Spanish, and Italian subtitles. In addition to its release through film festivals, the movie is available through “theatrical on demand,” which means that you can bring it to a local theater. The DVD, sound track, and photo book of the movie are currently being negotiated and will be available soon.

To find out more, see grazingthesky.com. To organize a Grazing the Sky screening at a theater near you, visit gathr.us/films/grazing-the-sky. Grazing the Sky is distributed by Programa Ibermedia. Photos by Aitor Echeverria