How a German Circus Saved a Jewish Family of Circus Artists 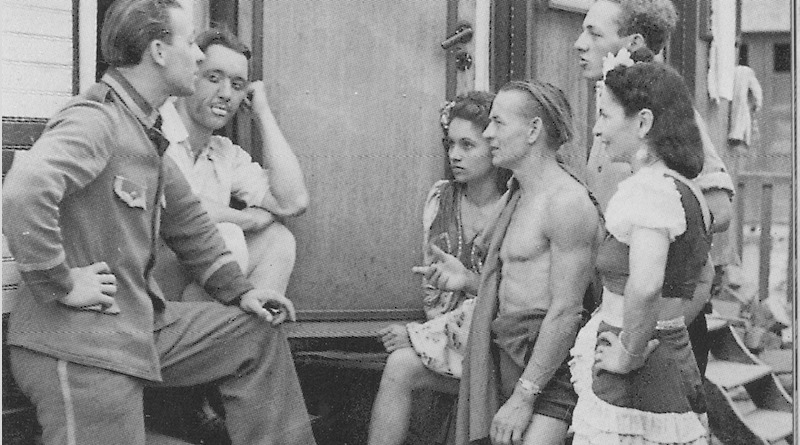 Back in 2013, I had typed a few words into the Google search bar, and little did I know that by clicking the search button I’m about to take the first step onto a completely new path – one that would shape the next few years of my life.

I had recently opened a new business: providing Jewish education programs and classes using performing arts to Jewish communities. My methods, which I had developed over a few years, also included incorporating Jewish culture with circus arts. I was curious if anyone else has made this type of mashup before, and thus I google searched for “Circus Jews”.

One of the first results that came up: the  New York Times obituary for Adolf Althoff, a German circus owner who saved a family of Jewish circus artists from the jaws of the Nazis.

Years later, I still recall the sensation that passed through my body: a combination of utter awe, adoration and excitement. I knew immediately that I had to find out more about this story, and furthermore, as an artist, I felt I must create an engaging and impactful experience that will pass on their story for others to know about these people and their heroic actions. Thus started a research journey that has spanned 7 years (and counting); from visits to archives, libraries and museums to collecting first and second person testimonies.  All of this research led to the birth of my new show The Escape Act – A Holocaust Memoir, told from the point of view of Irene Danner-Bento, the daughter of the family Althoff helped save. It is a touring one-woman theater show incorporating elements of circus and puppetry, based on Irene’s life and weaving my own experiences growing up a grandchild of Holocaust survivors.

Irene was born on January 28th, 1923 on the estate that had belonged to her family for generations, in the tiny German suburb of Eschollbrucken. She was the daughter of Hans Danner, a non-Jewish circus apprentice, and Alice Lorch of the Jewish circus dynasty Lorch, whose circus roots stretch back to the late 18th century.

Irene’s maternal family – the Lorchs – were like celebrities in their town, where they set up the winter quarters for their circus. The family was so important to the economy of the small town that the street the Lorchs lived on was named “Lorchs’ Lane”. Unfortunately, the name was changed during the Nazi rule and was never retrieved.

Founded by Hirsch Lorch during the second half of the 19th century, the Lorch Circus enjoyed success touring all over Germany. Even more successful was the family Icarian troupe. The family patriarch (and Irene’s grandfather) Julius Lorch led the troupe performing outstanding feats with his siblings, including a series of three consecutive double somersaults that Julius’s son turned on his father’s feet, and an extremely rare triple somersault.

An international sensation, they were so phenomenal that the Ringling Brothers famously booked them for a higher salary than any attraction before (or at least, that’s how they billed them). They performed in the United States from 1909-1912. They also toured South America with Circus Sarassani from 1923-1925. One of my favorite stories that I gathered while interviewing the family is from this tour: When Julius’s father Louis died aged 78 in Buenos Aires, it was illegal to bring the body back to Germany. As ingenious as only circus people can be, they cremated him and smuggled his ashes back home stashed inside the wheel of his trailer!

Julius’ wife, Sessie, raised her granddaughters Irene and (her younger sister) Gerda during the circus season, while Julius and their parents were away working. Irene was fascinated by circus life from a very young age: “I wanted to become a circus artist from when I was six years old. After school, I quickly did my homework, then ran outside to our backyard and turned cartwheels and handstands, probably a hundred flic-flacs as quick as lightning.” She was very much looking forward to the day when she could join her family’s circus.

Alas, the rise of the National Socialist Party (the Nazi party) in Germany, combined with its rabid anti-Semitism and a dreadful economic situation—rendered even tougher for Jewish enterprises which were systematically boycotted—made it impossible for the Lorches to continue to run their circus. They were forced into bankruptcy in 1930.

In 1941, when Irene was but 18, she and her sister went to see the Althoff Circus where a family of clowns – The Bentos – were performing. Peter Bento, who was Irene’s age, fell in love with her as soon as he set his eyes on her. She reciprocated, and quickly they made their case to Adolf Althoff, the owner, to give Irene a job at the circus. Althoff agreed.

Irene soon became pregnant and gave birth to their son in Decemeber 1942. The birth was one of the most traumatic events of Irene’s life: it was a Cesarean section done without any pain killers, by an anti-Semitic doctor who told her “anesthesia is reserved for our brave soldiers.” The doctor purposefully botched the birth and though the baby was safe, Irene’s stomach muscles were damaged beyond repair and she was never able to perform acrobatic tricks again.

In March, merely a few months postpartum, when Irene was still recovering at her Eschollbrucken childhood home, the Gestapo came and grabbed her grandmother Sessie for deportation, telling the half-Jewish, half-Arian Irene that “Your bastard will be next.” Sessie, who was like a mother to Irene, was sent to Auschwitz never to be seen again.

After witnessing this, Irene couldn’t let the rest of her family stay in their home, in plain sight and in danger. With Peter’s help, she persuaded Mr. Althoff to welcome her mother, father and sister into his circus. They spent the next few years performing at the Althoff Circus under Italian names (though the majority of the circus knew who they really were). Whenever the Nazis would come for inspection, Adolf Althoff would distract them with expensive booze, delicacies and circus tales, while Irene and her family would hide in a secret corridor built especially for them in one of the circus wagons.

An unsung hero in this story who must be mentioned is Mohamed Sahraoui, a Morrocan-Muslim acrobat who was their closest friend. While Adolf distracted the Gestapo, it was Mohamed who would run to fetch the Jewish family and help them hide. Mohamed is the only person who had lived through this as an adult and was still around for me to interview: In June 2018, I had the honor of meeting him at his home in Tangier, Morroco. At 94-years-old, he was as vibrant as a man half his age and had many stories to share of his time at the Althoff Circus during and after the war.

With a generous and courageous spirit, Adolf and his wife Maria saved the lives of Irene and her family. In 1995, the State of Israel awarded the Althoffs the title of “Righteous Among the Nations,” an honor granted to non-Jews who helped save Jewish people during the Holocaust while putting themselves at risk. The Althoffs and the Bentos remained friends throughout their entire lives.

Irene and Peter had five children, all of whom grew up to have circus careers. Three of them — Jano, Mary and Astrid – still live at the estate that once hosted the Lorch Circus and where their family had lived for generations. On the pavement outside their home, stumbling stones have been set to commemorate the memory of Irene’s relatives who did not live to see the end of the Holocaust.

When I visited the family estate last year and told Irene’s children about my research and my artistic work, I was honored to receive their blessing for making my show. I’m currently in Finland working as an artist-in-residence to make this show a reality. It will premier at the TransFolk Kucku Festival in Loviisa before going on an Autumn tour in the United Kingdom, visiting London, Bristol, Birmingham, Manchester and Sheffield.

Seven years in the making, I’m thrilled I will soon get to bring these incredible histories to audiences everywhere. Best part? In November I get to bring the show to Eschollbrucken, Germany. I was invited to perform for the local community on the anniversary of Kristallnacht, at the very same synagogue where Irene’s grandpa Julius used to pray every shabbat. I’m excited to have Irene’s children in my audience, and to have this process go full circle as I bring this show to where it all began.