Underbelly Circus Line-Up for Edinburgh Fringe 2019 Covers It All 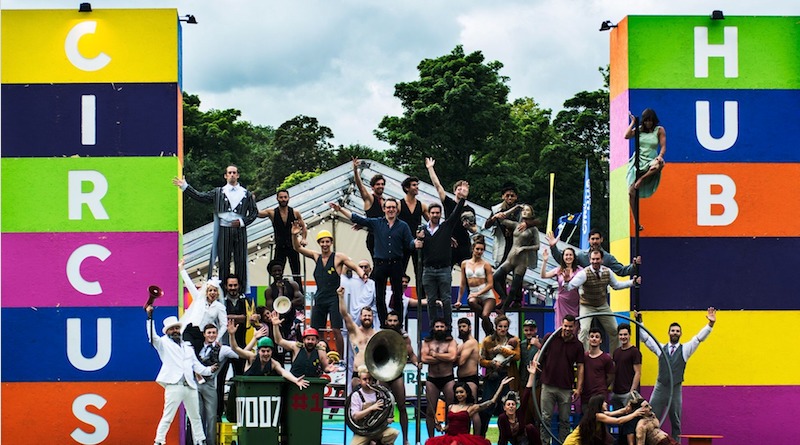 Edinburgh Fringe’s biggest circus venue, Underbelly, offers 13 circus shows this August and features five premieres. Such a huge draw for the Festival is important to note, in this 5th year of their operation,  just as theircontractwith the council is up for renewal.

Editor Kim Campbell will be present at the Edinburgh Fringe this year to cover circus, and will be spending a lot of time at the Underbelly site (as well as at other venues) watching shows and interviewing company members, so tune in later in August for more coverage. Until then, feast your eyes on this line-up:

Backboneby Gravity & Other Myths is a high-octane spree of physical virtuosity, Backbone tests the limits of strength: physical, emotional, individual and collective. Staged with a deceptively DIY aesthetic and dispensing of trickery and distraction, this is circus that goes straight for the jugular and leaves no viewer unmoved. Backbone is the culmination of all that’s gone before: a celebration of human connectedness and the meaning of strength, its athletic appeal is run through with a conceptual brilliance that elevates it to a new level. Sexy, sincere, raw yet disciplined, this show is proof you can’t do the impossible without expending a little sweat.

Five-star Fringe favorites Circa (Closer, Beyond, Wunderkammer) return after their 2017 blockbuster season. This is thrillingly fearless, boundary-pushing circus at its best. Ten acrobats take us on a stirring journey of what it means to be human, and how our bodies, our connections, and our aspirations all form part of who we are. Created by Yaron Lifschitz, Humans asks how much can we take – how much weight can we carry? Who can we trust to support our load?

Don’t Mess with the Dummies

Following the global smash success of the multi award-winning Trash Test Dummies and critically acclaimed Splash Test Dummies, comes Dummies Corp’s all-female circus sensation Don’t Mess with the Dummies.Lions, tigers and Dummies, oh my! Set up camp and stampede into the jungle for an outlandish circus filled extravaganza that will leave you chuckling like a monkey and roaring for more. This brand-new ensemble takes centre stage with an endearing blend of circus, comedy and character that will leave your heart on your sleeve and your jaw on the floor.

Bursting onto the scene with passion, emotion and talent, Los Angeles’ Short Round Productions presents Filament. Amazing circus skills collide with a story inspired by your favorite 80s teen movies to create ‘a welcome change from the formula adhered to by many other circus shows. This fresh take on acrobatic theatre dives into the trials and tribulations of growing up and discovering who you are, all set to a backdrop of dazzling lights and an infectious soundtrack.

This playful new aerial show from All or Nothing and Room 2 Manoeuvre delves into the world of superheroes and beyond! In their quirky circus universe, two performers (and their miniature sidekicks) explore what it means to be a hero. The dynamic duo tackle the darker side of life in the spotlight and the pressures of being a role model with a never-ending list of enemies. Are we blinded by celebrity? Or are the ordinary people living extraordinary lives our true heroes? Families assemble – don’t miss this clever caper told through aerial dance theatre and contemporary circus.

Irresistibly colorful, loud and fun show for all the family. Thrillingly spectacular circus skills, physical comedy, clowning, theatrical storytelling and slapstick combine in this follow up to international hit The Hogwallops from ‘good old fashioned contemporary circus’ company LiT. A rundown hotel becomes a physical playground for the six multinational highly skilled acrobats, clowns and jugglers. Madame and the charming staff of the quirkily ineffective Hotel Paradiso battle to save their home and livelihood from the dastardly banker.

Have you ever seen a giant block of jelly – wobbly, jiggly and strong enough to stand on? From award-winning circus creators, Jelly or Jam takes you on an acrobatic adventure into the brains of young humans. Guided by real interviews with kids about their emotions and friendship, this UK premiere examines the control we have over our individuality through testing the physical limits of two giant blocks of jelly. Don’t miss this rollercoaster ride filled with squishy, messy jelly that will inspire people, young and old, to consider the importance of individuality and friendship.

Two clowns struggle to change their day-to-day life. Exasperated of waiting for the biggest international theatres’ call, they decide to accept the unthinkable contract… a children’s birthday. Their life is then revealed to you. An exuberant appearance often hides a disturbing sensitivity. While the laughter bursts, their distress swells slowly. In their quest of fame, will they manage to be loved?

Company 2 the company that brought you the smash hits Cantina and Scotch & Soda are back with a new work Le Coup, late night neo-vaudeville speakeasy. A place where hard-hitting traveling entertainers clash with the glamour of high society. Daring acrobatics, aerial feats and twisted tails. Supported by the live sounds of none other than musical masters Father Grant and The Blunt Objects. Frock up for a night out at Le Coup – a fleeting moment where there’s nothing to lose and everything to gamble.

Circus for grown ups: a decadent blend of sensational acrobatics, operatic cabaret and twisted burlesque. Weeklies winner Best Circus Adelaide Fringe 2018 and Fringeworld 2019. ‘Welcome to a circus for the new age… Brilliant performances covered with rhythm and attitude with a certain aura permeates the venue that embodies the phrase “Filthy and Gorgeous,” says Weekend Notes.

Rub-a- dub-dub, The Dummies are back with their “splashingly awesome adventure” (Edinburgh Festival for Kids) set to drown you in tears of laughter. From the makers of hit show Trash Test Dummies! Splash Test Dummies are here, ready to roll out their beach towels and spring into an hour of circus-filled hilarity for the whole family. See a brilliant array of catch-your-breath stunt work, acrobatics, juggling and the side-splitting, slapstick comedy for which the dummies are famous. Join the Dummies and come diving from bathtubs to beaches in this aquatic adventure!

Race Horse Company’s massive international success Super Sunday is colorful, vivid and perky and was born out of the possibility of implementing the company’s wildest dreams and bringing them onstage. Super Sunday is an entertaining rollercoaster ride with a boneheaded approach and endless black humor. The show is packed with daredevil stunts on trampolines, teeterboards, Russian bar, human catapults and a Wheel of Death act like you’ve never seen before!

Sugar, spice, and apparently nice? With our bloody good sense of humor, we’re going to rip into the uncomfortable using high-flying acrobatics, absurd confessions and groovy dancing. Winners of Best Emerging Artist at Adelaide Fringe 2019, and the Fringeworld top-tier Martin Sims Award, get ready to witness a powerhouse of female Aussie Circus Performers kick art in the face.