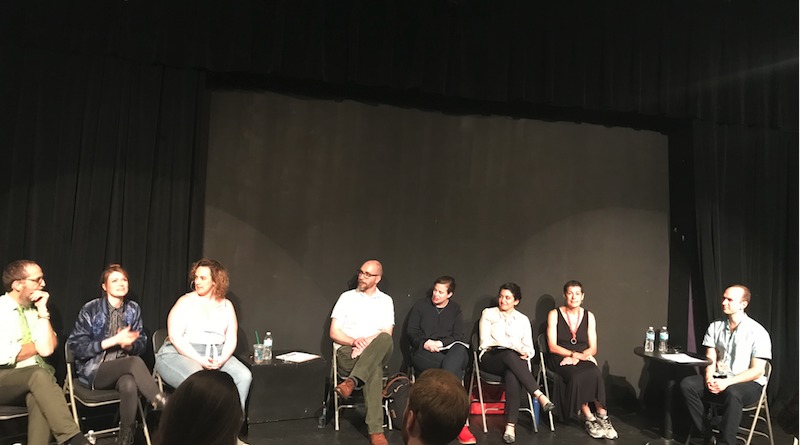 In the circus community, touring is commonly known as a very difficult thing to plan and then to execute. That’s why a group of aspiring touring artists convened in a small conference room in the back of a theater to drink up the wisdom of artists and programmers who havemade it on the road. The multi-room theater, Stage 773 had been transformed into a festival ground for 10 days in June for Physical Theater Festival Chicago, an annual physical theatre festival that programs cutting edge international and domestic physical theater shows.

The Chicago Physical Theater Festival began through the Artistic Associate program at Links Hall in the summer of 2014. As their website says, Alice da Cunha and Marc Frost “were inspired to start a new festival to promote a more progressive, fresh and physical approach to theater-making in Chicago.” The sixth edition of the festival was also working on pushing the industry forward by holding a space for conversation and the sharing of industry knowledge by holding this panel (along with a short program of other workshops) titled International Touring Talk. The panel was hosted by Marc Frost, co-artistic director of the Festival, who led the discussion and asked the tough questions.

Why should an artist tour? What might a company hope to gain from a tour?

All of the panelists agreed that each artist and each company will have a different reason to decide to go on tour. Some of the major ones mentioned where: Artistic risk, performing for new audiences, evolving your show, cross-cultural communications, networking and making new connections. The main takeaway was that it is important to clarify the reasons you decided to go on tour before you begin the process of planning so that you make choices that take you closer to your goals.

Angelique Grandone, who currently works with the Chicago Park District as the managing director of Theater on the Lake: Chicago’s Summer Theater Festival and as a programmer in the Night Out In the Parks program framed it so nicely when she said: “There is a different reason [to tour] for every artist. There are benefits and there are drawbacks to touring, but ultimately I think a lot of people don’t necessarily know the answer to that question when they decide to start trying to tour. Without that answer, of what [touring] is going to get for you or your company, it is going to be hard to define what success is. Everything may feel like a setback when it doesn’t go as planned, and it’s not going to go as planned. You should know what you want so that you can stay the course”

Where do you tour? Which is tied to the question; Who is your audience?

There are many ways one can think aboutwherea company wants to tour. Will it be a national tour or an international tour? Will you perform in theaters, universities, or elementary schools? Do you want to perform in festivals or solo? Is your show polished and done or could you utilize a residency that ends with performances? Can you fit your entire set in a suitcase or will it cost thousands of dollars to ship your props? Knowing the answers to these questions that the panelists put forward will help you to narrow down the locations and types of venue that you should take your show to.

Yolanda Cesta Cursach Montilla, Independent Curator and Artistic Director at High Concept Labs, pointed out that “It’s important to always consider [performing at a] university… it’s actually about sharing the process. Increasingly, universities are the rare US institutions that can actually support a residency and exploration and creation.”

Doreen Sayegh, who produces Chicago Shakespeare’s international programming and is the board vice president of Links Hall and the League of Chicago Theatres, gave us all a great tip: “I think that there are a lot of different versions of touring and if you can think about your work, maybe there is a company or two that do similar things. If you’re just starting out, there is probably a company that you really admire and doing something that sort of resonates with the work that you do, look where they’ve gone. I feel like that’s a really great way to learn about a lot of venues that probably aren’t on your radar.”

So if you have an elevator pitch, how is that actually not just engaging, but mutual?

What is the difference between self-producing versus being produced?

Sayegh explained, “The first main difference is context and you putting yourself into your own context versus somebody else inviting you into theirs. There are a lot of financial differences, where you’re responsible for getting yourself there. You’re getting the company there, getting the show put up and you’ll have varying amounts of support. If you’re being presented– typically that support is a lot greater.”

Other panelists also mentioned that when being produced, there may be more negotiation required. For example, perhaps you will be asked to put an intermission into your show when you have chosen not to have one for artistic purposes. You have to weigh for yourself if the compromise is worth the support you receive. For artists and companies who choose the DIY path, or for those for whom it is the only option, the panelists agreed that cultivating relationships with theaters, artists, and organizations outside of your local city to do exchanges with, is you best bet. For example, create a connection with like-minded artists to double bill when you travel to each others cities.

How do you talk about your work?

The panelists agreed that the best way to talk about your own work, whether it’s an elevator pitch, marketing materials, a tech rider, a conversation with the press, or with a potential audience member, is to do it with authenticity. John Rich, the Dance and Theatre Coordinator for the Department of Cultural Affairs and Special Events at City of Chicago says “So if you have an elevator pitch, how is that actually not just engaging, but mutual? Not just something to spit at you, but something that actually is opening a conversation?” The panelists had an interesting conversation about how one can think of marketing as another form of artistic expression and as artists we have the drive to create beautiful and intriguing stories, so why not do that with your marketing as well? It will make it more magnetic for your audience, but you will also have more fun creating the materials if you can look at it as creative process instead of a chore.

How do you market in a new city?

There were many marketing tips from the panelists. They suggested, if you are being presented, tell your presenter you are interested in marketing opportunities so they will think of you for radio, tv, and any other marketing they might be planning. If you are self-producing, don’t be afraid to ask other artists in the area for help or suggestions because as a community we survive by sharing. Dana Murphy company member, and marketing and education manager of Walkabout Theater, talked about her experiences with marketing for the theater. She said “We were really interested in treating [touring] as a marketing opportunity for us locally. How can we share our experience of going to these new places with our audience at home in a way that feels authentic? We wanted to share what was going on, what our experience has been and also kind of keep our audiences engaged because we only made one show for like two, three years. So you have to find ways to keep people involved in that process.”

Physical Theater Festival’s International Touring Talk panel was chock full of insightful and practical advice from professionals who have the experience. One of the major themes I could see emerging throughout the whole talk was the idea that companies and artists should design their shows from the very beginning to be tour-able instead of waiting until the last minute to scrape it together, and that being clear on your expectations is key. It’s a tough industry and sometimes it can feel like the dream ofgoing on the roadwill always be out of reach. But finding opportunities like this for knowledge exchange is what keeps our community growing, thriving, and touring.