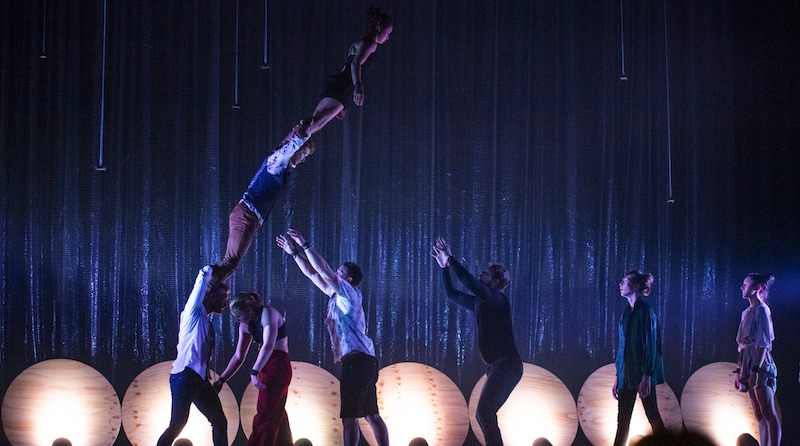 Q. What do a clown and a pandemic share in common?

A. Responsibility for the International Circus Awards (ICA) becoming a reality in 2021.

It’s true. Thanks to the global lockdown that grounded flights and forced everyone in the world onto digital platforms, the Contemporary Circus and Immersive Arts Center (CCIAC) Founder and Executive Director Aaron Marquise was able to plan the inaugural awards program long ahead of schedule.

Marquise, an École nationale de cirque (Montréal) graduate, conceived of the International Circus Awards (ICA) years ago, but imagined it to be a far-off goal for the CCIAC, the non-profit organization he formed in 2019 to promote, produce and present contemporary circus. Shut in at home with a mild case of COVID-19, Marquise tore up CCIAC’s pre-pandemic calendar and began creating digital content for the circus community – Circus Hiatus interviews and weekly this week in circus for CircusTalk News – and the public – Clown in Quarantine and A.Lone (full-length film of an original staged one-clown show). The enthusiastic reception and low production cost of these projects demonstrated to him that 2021 was the perfect year to launch the ICA.

Marquise reached out to the professional circus community to assess interest. With time on their hands and pandemic-stagnation at their doors, dozens of colleagues across the globe came online to explore ideas for launching the ICA virtually. As a result, dozens signed on to co-conceive the process and outcomes. A management team was formed and over 30 professionals from 16 countries committed to judge the entries.

Without the need to fund extravagant travel, galas, accommodations, catering, sets or costumes, the ICA was born in a global shut-down to do exactly – and only – what it was conceived for: to celebrate extraordinary achievements within the global circus community, spur advancements in the genre, and elevate public awareness of and appreciation for the circus arts. The 2021 ICA will honor artists engaged in creating, performing, directing, and designing circus shows with award categories focused on originality, impact and excellence.

At last, circus has ascended to the stratosphere of performing arts held aloft annually by professionally juried awards such as the Tonys, Oscars, Obies, and Grammys. Within months of the initial Zoom brainstorming sessions, entry and adjudication rules were crafted, judges recruited, submissions called for, and renowned presenters lined up, including Daniel Lamarre, CEO of Cirque du Soleil. Sixty digital entries poured in by the deadline from 21 countries. At the time of this publication, the judging process is well underway, including public voting for the Audience Choice Award.

For centuries, modest circus troupes crisscrossed their continents to present circus that was fleeting yet perennial, life-affirming and death-defying, ephemeral and immediate. Most circuses of the 19th and 20th centuries would be seen as “low” or “folk” art. The appearances were designed to pull in what gasps and dollars they could quickly from one town’s everyday folk before scarpering off through the night to another.

Nonetheless, like royalty rising above the masses, multigenerational family dynasties became broadly renowned, the mention of their names evoking awe for their acrobatic, flying, graceful and dangerous acts. Also starring in traditional circuses, of course, were the barely-tamed – or seemingly wild – animals and the slapstick contingent of clowns. The former served as foils for the trainers to demonstrate derring-do through death-defying acts. The latter offered comic relief and distraction.

Today, circus artists of the human variety carry the full burden of evoking from their audiences fear, awe, giddiness, empathy, guffaws and elation. Most contemporary circus has left behind the sequence of unrelated acts for a more theatrical approach to moving an audience: narrative structure; conceptual theme; scripted speech; original or adapted music; emotionally evocative costumes, sets,  lighting and sound; and movement/choreography across a broader swath of stage than the “rings” of old.

In the past, circus performers and dynastic families have been lauded for their awe-inspiring acts, and huge producers were renowned for the pomp, circumstance and extravagance of the circus they brought to town. In 2021, the ICA will celebrate magnificence in contemporary circus’s cohesive shows: the artists who craft them and the artists who perform in them.

Circus is no longer a binary choice. Contemporary doesn’t only indicate that no animals are performing, it is an umbrella term for the myriad modes of circus being produced and presented today.

To demonstrate the ubiquity of contemporary circus’s theatrical elements and the divergence of its themes and constructs, I offer four recent examples from works the CCIAC has presented in Troy, NY.

Roadkill, a one-performer act created collaboratively by Cooper Stanton and Marquise, followed a fox through the challenges of living wild but in close proximity to humankind. Every sound and sight moved the audience through empathy, fear, sadness, humor and exhilaration – along with brilliant displays of Stanton’s circus skills. In Oh, Garcon, an immersive dinner/clowning experience created and performed by Marquise, engages the participant-audience within a loose narrative that responds to the unique dynamics of awkwardness (their own and the clown’s) and titillation that come from meeting new people in an intimate setting.

Eventide, by 3AM Theatre, uses the team’s juggling, humor and dance skills along with dramaturgy, music, sets and lighting to strip bare a young couple’s marital despair and then to thrill the audience with their refound love. Hideaway Circus’s Stars Above: An Open-Air All American Circus, presented as CCIAC’s 2021 Circus in the Park production, evokes pathos and affection along with awe and laughter in this contemporary show about traditional circus.

The ICA is one platform through which the CCIAC strives to elevate contemporary circus as an increasingly sought-after performing art form, especially in countries where it is little known or understood.

“Circus is no longer a binary choice,” explains Marquise. “Contemporary doesn’t only indicate that no animals are performing, it is an umbrella term for the myriad modes of circus being produced and presented today. Entries to the 2021 ICA demonstrate the tremendous breadth of circus creativity emerging around the globe.”

Troy, a small city alongside the Hudson River and part of New York State’s Capital Region, is experiencing a cultural revival. The region includes four robust small cities, has an international airport and national train service. It sits at the interstate crossroads among Boston, Philadelphia and points west, Montréal and points north, and New York City and points south. It is Marquise’s hope that the CCIAC will serve as a gateway to the United States for circus companies coming from the Americas, Britain, Europe, Africa, Asia and beyond.

As for hosting future ICA ceremonies, with in-person performances and presentations? The region is rich in temporary housing, transportation and event venues of every size and shape. Marquise hopes that finalists, presenters and enthusiasts will energize the New York Capital Region for each future ICA awards ceremony with the fantastic whorl of every international circus gathering, with public performances abounding in theaters, clubs and arenas, while the business of circus is advanced and celebrated.

In this inaugural year, planned as a digital/virtual process, the ICA management committee capped entries at 200 and kept the awards categories to ten:

The ceremony will be filmed at the Troy Savings Bank Music Hall – a venue known internationally for its incomparable acoustics and exquisite beauty – and will air on October 9, 2021 at 3 pm Eastern time (USA).

Visit the CircusTalk ICA page to see the list of nominees and for more news about the International Circus Awards visit their website. To learn more about the mission, vision and programs of the Contemporary Circus and Immersive Arts Center, visit the  CCIAC  website. United States
Rhonda Rosenheck, M.Ed, is a published writer, internet-startup entrepreneur and retired private-school leader. She enjoys living, writing and volunteering in New York’s Capital Region, with its gentle manners, natural beauty and cultural liveliness. Rhonda is the founding and current board chair of the CCIAC. She can be contacted through her author’s website, rhondarosenheck.com.
Rhonda's profile
You are about to enter a members-only zone.
To share this article on your CircusTalk member page and connect with circus professionals from all over the world, sign up now. It's free!
Sign Up
Already have an account?
Log in

Rhonda Rosenheck, M.Ed, is a published writer, internet-startup entrepreneur and retired private-school leader. She enjoys living, writing and volunteering in New York’s Capital Region, with its gentle manners, natural beauty and cultural liveliness. Rhonda is the founding and current board chair of the CCIAC. She can be contacted through her author’s website, rhondarosenheck.com.