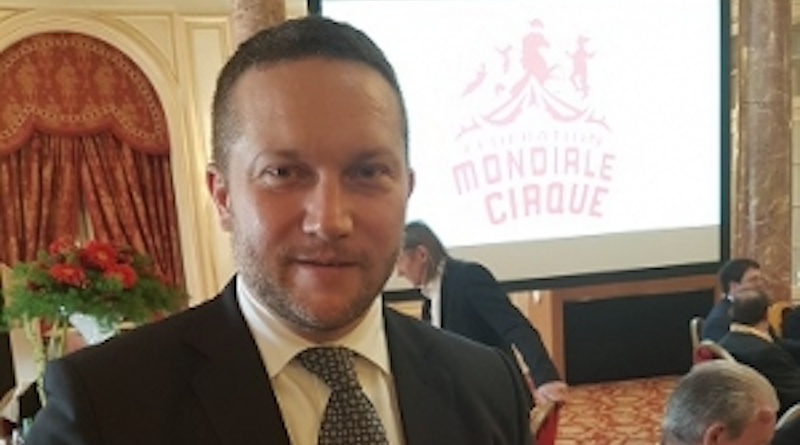 The board of directors of the Fédération Mondiale du Cirque under her patronage of H.S.H. Princess Stephanie has appointed Dr. István Ujhelyi, member of the European Parliament, as circus ambassador 2018 for his valuable support and ongoing contribution to circus arts. Ujhelyi was honored by Honorary President Princesse Stéphanie de Monaco at the annual Circus Directors’ Luncheon at the Hotel Hermitage in Monaco on January 21, 2018.

The circus ambassador position has never been given to a politician before. Ujhelyi’s predecessors include notable leaders of the circus industry, such a Maxim Nikulin (2017), the general director of Nikulin Moscow Circus on Tsvetnoy Boulevard, Zhigang Su (2016), chairman of the Guangdong Chime-Long Group, which owns and operates the Chime-Long theme parks, (including the Chime-Long International Circus), Tadasuke Kinoshita (2014) founder of the Japanese Kinoshita Circus and Kenneth Feld (2013) chairman and chief executive officer of Feld Entertainment, Inc.

Ujhelyi was recognized for his work in the interest of circus arts and his initiatives for the renewal of the circus world. As a politician in the European Parliament’s Tourism Committee, István Ujhelyi initiated the Circus Manifesto and the creation of “Big Top Label” a classification system for European circuses, similar to the Michelin stars certification. This classification program, that was presented at the recent International Circus Festival in Monte-Carlo, aims to guarantee compliance with labor law, service and, where appropriate, livestock requirements, in addition to artistic quality.