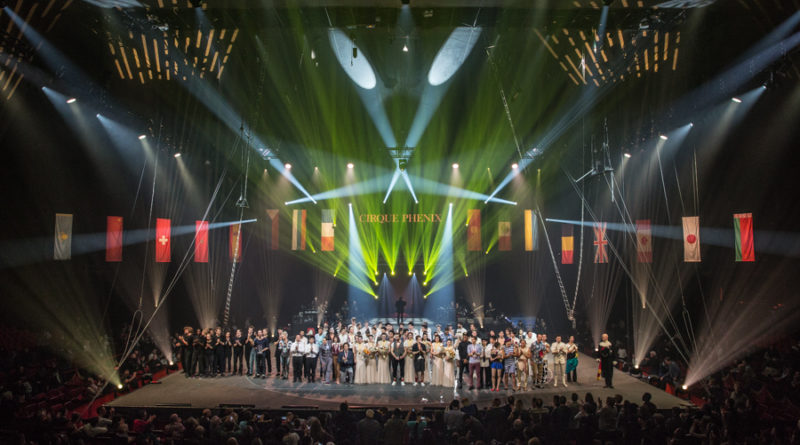 Festival Mondial du Cirque de Demain is now in its 39th year of keeping up a tradition of competition and spectacle at the highest level while at the same time focusing forward towards continual development in the circus field. The festival, competition and conference is running from February 1st to the 4th in Paris. This international festival attracts performers, directors, and agents from around the world and offers a glimpse of today’s most influential circus acts while awarding the winners prizes and contracts. The festival also attracts a large audience of non-industry folks who get to bask in the glory of high-end contemporary circus once a year.

Winners are chosen by an international jury, although for the public prize, the audience members cast their vote to choose a winner. Kirsty Bell, the manager of Club PRO at Festival Mondial du Cirque de Demain says, “Each year 24 competing acts are selected to perform in the festival. These 24 acts are divided between two shows made up of 12 acts each, Show A and Show B, which are performed twice each over the weekend of the festival before the prize-winners are selected by our jury to perform in our final show on Sunday. In addition to our 24 competing acts, there are 4 guest performers: former artists of the festival who return to our stage to complete the shows.”

I had the opportunity to speak with Pascal Jacob, the artistic director and vice president of the festival about the festival itself. Jacob describes the mission of Festival Mondial du Cirque de Demain as “to give young circus talents and performers the opportunity to show their skills in front of the largest group of circus professionals ever assembled in a festival: directors, producers, agents, performers, choreographers, who all come together in Paris for this unique occasion.”

The festival is well known for finding international up-and-coming talent. Jacob plays a big part in discovering new circus artists that are en route to changing the art form. He says that his role as Artistic Director of the festival leads him to “look for and identify young talents all around the world. Circus schools, notably, are a strong resource field for us, so between Montreal, Châlons, Bruxelles, Stockholm, Berlin, Tilburg, Rotterdam and London, I have a lot of possibilities of finding some of the best talents for tomorrow. But I am also open to any opportunity to find an unknown and amazing performer: on the beach, in the street, in India as well as in Paris!”

Each festival is a metaphoric projection of circus here and now, so we follow the worldwide trends of creativity–Pascal Jacob

Dominique Mauclair founded the festival in 1977 as a tribute to Louis Merlin, a French radio pioneer and circus enthusiast who helped solve many of the problems that afflicted French circus performers. The original mission was to give a career boost to emerging performers and help them grow in the industry. The proceeds would aid the young performers by helping them buy a costume, take dance lessons or produce new music for their performance. After a few years Les Bourses Louis Merlin became Le Festival Mondial du Cirque de Demain.

The festival is chock full of circus disciplines. Jacob tells me that every year they try to build a comprehensive “photograph” of  modern circus. He explained that like in most art forms, there are periods where specific disciplines become popular. He says that right now we seem to be in a straps period but the shows will also have many other disciplines like diabolo, Russian bar, aerial hoop, trapeze, hand to hand, and juggling.

When asked how the winners get picked, Jacob says “by an international jury of professionals representing a cross-section of expertise from the performing arts world: performers, circus school directors, casting directors, circus owners as well as museum curators, puppeteers or artists.” The types of prizes vary, according to Jacob “The winners can receive a medal (gold, silver or bronze), a special prize awarded by the Jury, and different awards given by circus individuals or companies. It can be a contract, a cash prize or an object to symbolize the prize.”

Mathiew Richardson is returning to perform this year as a guest, originally performing cyr wheel in the 36th edition of the festival. He went to school for graphic design, and worked in advertising for years before pursuing professional circus. Richardson says competing at Festival Mondial du Cirque de Demain opened up many opportunities for him: “My experience with the 36e Festival Mondial changed my life. I made so many contacts, and immediately had performance offers I had never had before. It’s truly an opportunity for an artist to make a big impression with great people & companies. For me, the festival lead to me working in my dream job with Cirque Du Soleil, so it allowed to me to truly reach my biggest dream.” Although it opens many doors, Richardson admits that making it big can come with its struggles. “Since the Festival, so much has changed. I struggled with two pretty sever injuries, that put my circus career on hold for a long time. But I also accomplished some of my biggest goals, and had some of the proudest moments of my life. For me, coming back to the Festival feels very full circle, because this is where everything really started to take off.” Richardson isn’t just performing as a guest in the festival, he is also the designer of the festival poster, as well as the subject of the poster, which he says he found his inspiration from by experimenting with powders and pigments to realize his preferred aesthetic on the cyr wheel.

This year some of the most anticipated performers include: Art Core, Diaboloism, Duo Destiny, Barcode Company, and Lazuz Company and more. When sorting out the show schedule, it is important to note that in both an A and a B show, the format is the same but all of the performers are completely different. Jacob explains, “the two shows are totally different: to see both of them is a great experience and the only way to discover, and appreciate, the complete selection of artists each year. Each performer is clearly and definitely unique, it’s the essence of circus. And even if you have two, three or four juggling acts in the competition, they each have their own style and, of course we also select artists with specific skills and props! If we take the example of Jimmy Gonzales who juggles with clay, there is no doubt he will be alone in its own category! This means we can have a juggler with clubs or one with cigar boxes in the same show!”

Festival themes vary from year to year, but Jacob explains how they are dictated by the current trends in the industry. “Each festival is a metaphoric projection of circus here and now, so we follow the worldwide trends of creativity and we try to build two shows each with their own integrity. Regarding the idea of a theme throughout the show, it is clearly linked with the opportunities presented each year: it means one edition might be infused with more humor than another one, or some years can be more aerial, but it is not a choice, rather more of a natural inclination.”

Jacob has seen the festival change a lot over the years. He says “the main difference between yesterday and tomorrow is the global absence of troupes and collective acts trained and created in schools. Having three of four people working on the same act is very unusual and really that’s not even a large group! Of course, there are a few countries where troupes are still alive and active, but it is also a question of style; at the festival we aim to be a contemporary window open on the circus world.” Jacob gives this advice to young and emerging circus artists: “Be creative! Surprise us and you will surprise the world!”

For industry professionals who are interested in networking, events, workshops, and panels: Club PRO offers many additional activities for circus artists and and professionals in every category of circus. Read our previous article on Club PRO features. Both of the general rehearsals are open to Club PRO members by showing your badge at the door. General rehearsals are Thursday, February 1st at 2PM for Show A, and Friday February 2nd at 2PM for Show B. Tickets to the festival can be purchased for Spectacle A, Spectacle B and Spectacle Des Laureates (the finalists).