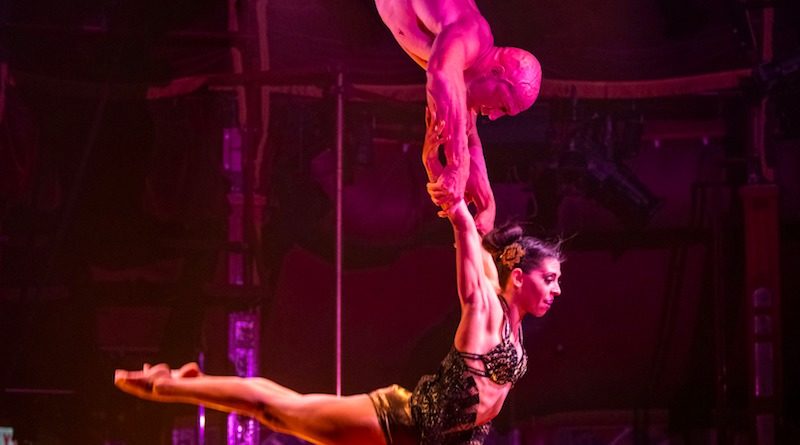 “Of all the Spiegeltents in all the neighborhoods of Chicago, Cleopatra walks into Chef Caesar’s joint…” starts the Teatro Zinzanni program, and I think that statement sets the stage (the circular stage) just as well as any. Because now you know if you go to see this dinner theater performance on the 12th floor at the Hotel Cambria, and enter the lush, reflective environment of a mirrored wooden Spiegeltent, there will be funny, there will be fantasy, and there will be food.

But maybe what you don’t know yet is that there will be music, dance, circus, nostalgia and above all else, variety acts delivered with a dash of mayhem and a spicy attitude. The recently relaunched enterprise, which originally opened in2019 in Chicago (1998 in Seattle) is the first to open back up in Chicago’s Loop, and it hits all of the marks for hungry audiences–those hungry for gourmet grub and booze, as well as those hungry for live entertainment. Perhaps just as important, the cast seemed just as hungry and relieved to provide that live entertainment, and all of the catharsis that comes from the temporary bonding achieved from mutually experienced live art, after a year plus of lockdown. The joyous way the performers reveled in the limelight made joining in the fun irresistible.

For the duration of this three-hour show and four-course meal, the audience was happy to transport to another world and to enter a luxurious, intimate space where dinner theatre is a staple of a good date night or an out-of-town visit. The whole team at Teatro Zinzanni has mastered that environment, from the impeccable and delicious meal provided by Debbi Sharpe of the Goddess and the Grocer to the flawless timing of each performance and each musical interlude. The dextrous pacing of the show mesmerizes with tone changes swinging from nostalgia to awe and from romance to mirth. But the real miracle to me is that after such a long hiatus, the wait staff and the cast never missed a beat, serving up personality and impressive feats as if they hadn’t just spent the past 15 plus months trapped on a sofa with potato chips and Netflix. In other words, they pulled it off.

The show’s host Caesar (Frank Ferrante-USA) typically gets a lot of credit for bringing the fast-paced, Vaudeville-esque wit to the floor. His Tony Clifton routine, smarmy, full of bravado and ironic narcissism often walks a knife-edge, sparking guffaws one moment and groans the next, for Ferrante’s humor lies in his quick access to the thousands of ready-made puns in his repertoire that poke fun at his unwitting victims, the audience. To be fair, he plays equally upon the stereotypes we all recognize of humanity, the bald, the old, the long-haired, the cute young couples. But every so often he lurches into dangerous territory, accessing an extemporaneous pun from a bygone era aimed at a marginalized person and the communal cringe becomes a bit too real. Marco (Joe De Paul-Canada) on the other hand, an equally seasoned comedian (and show co-director) delivers a lovable underdog character that would much rather prefer to punch himself than to punch down. Watching him impersonate King Kong while rotating in slow motion, revealing his ordinary boxer shorts and potbelly along with his impotent rage and bewilderment inspires nothing less than love and admiration among the crowd, especially when juxtaposed with Caesar’s sharp tongue and the hard, fit bodies of the remaining cast who step up to reveal their circus superpowers one by one.

Soon the farce unfolds and we meet the talent, Cleopatra herself (Storm Marrero) and her equally bedecked sidekick Cunio. Covered in Liberace-boosted Egyptian regalia, they glide slowly into the chaos and fun with dignified poses, and whenever they open their mouths to sing the audience leans in, gasps, smiles, sways along, followed by thunderous applause after each impeccable number. There is something unique about this juxtapositioned duo–first, their voices. Cunio’s Queen cover simply melted faces and Marrero’s range, (from her opera training) melded with her R&B vibe and shook the room for each and every song. But beyond their harmonious musicality was another unique juxtaposition–their appearances. They are ‘the others’ compared to the predominantly white, traditionally gender-conforming cast just by virtue of who they are as people, Marrero is a plus-sized Black woman and Cunio triumphantly subverts gender norms in his costume and makeup expression–mixing corsets, tattoos, heels and gowns with stunning results. But their presence does not just represent an alternative to some mythic norm. They soar above the world of mere mortals with their luminous presence on stage, acting as a substantial counterbalance to Casear’s empty swagger– because these two artists put their money where their mouths are and deliver the goods while the ludicrous Caesar spends much of his time working the room trying to convince people to hail him.

Enter Coco (Mickael Bajazet–France) a sort of wannabe host, trying to edge his way into emceeing the event, tuxedo ready, charming, playful, inviting, and watch how he gets edged off of the stage over and over again by the relentlessness of the show’s pacing. He is the everyman dreaming of the limelight but not aggressive enough to own it…The tension builds until finally, he has a moment to shine with a comedic magic routine and a moving Flamenco-inspired dance scene with his partner which breaks all of the rules of gravity by mutating into a lively hand to hand act.

Throughout the farcical rhythms of the show, comes wave after wave of astounding circus–which has a great impact due to the closeness of the performers. Performing in such a glamorous circus space like the Spiegeltent ‘Zazou’ means there is no fourth wall, and the frequent involvement of audience members in the show breaks that down even further. We’re all family there…there is (seemingly) no boundary between you and that half-naked Egyptian God in front of you. Just don’t make eye contact if you don’t want to get pulled up on stage and be an even bigger part of the show. But still, when you see a woman (Cassie Cutler–half of the Duo 19 partnership) walking on bottles 12 inches away on your actual dinner table, or when an aerial act swoops a few feet from your airspace, you can’t help but feel involved.

Vita Radionova (Ukraine) on hoops is so close that she can lock eyes with you while maneuvering the many props being tossed over heads to add to her growing multitude of wrangled hoops. Lea Hinz (Germany) on lyra performs eloquently, providing a moment of calm admiration for the riled up among us, and the finale act by Duo 19 is enough to make you pause mid-dessert bite and wonder why you haven’t been to the gym lately. Oliver Parkinson and Cassie Cutler (USA) bring down the house with their duo trapeze number that ventures out of the merely astounding and into the territory of groundbreaking by the combination of Russian cradle and trapeze skills that they bring to the act. In any space it would be gasp-inducing, but in such an intimate space, the physicality of their romantic trapeze act (handyman and maid fall for each other) becomes a culmination of sorts–of all of the tension built throughout the show between characters and comedy, drama and music, circus and schtick. It’s a comforting moment where all ends well, with love.

Although Teatro Zinzanni has not published a name for the new iteration of their show yet, the previous name from the 2019 launch,Love, Chaos and Dinner, seems apt here. Many of the show elements from back then persist as well–although some new twists have been added along with new cast members.

Brought to us by Randolph Entertainment with Norman Langill (Founder, Artistic Director), and Stanley Feig (Executive Producer), with spot-on musical direction by Hans Teuber, dazzling costumes by Debra M. Bauer, perfectly envisioned lighting Peter Braciliano, and most of all, well-orchestrated stage management John Grüber, the dinner theatre experience is likely to continue to rebound and thrive in Chicago, where there is never a shortage of out of town visitors, impressive dates nights, local luminaries, significant anniversaries and lively work outings to warrant such an opulent, elegant, yet irreverent night on the town.Tickets range from $69 (show only) to $189.

This article was also published on Third Coast Review