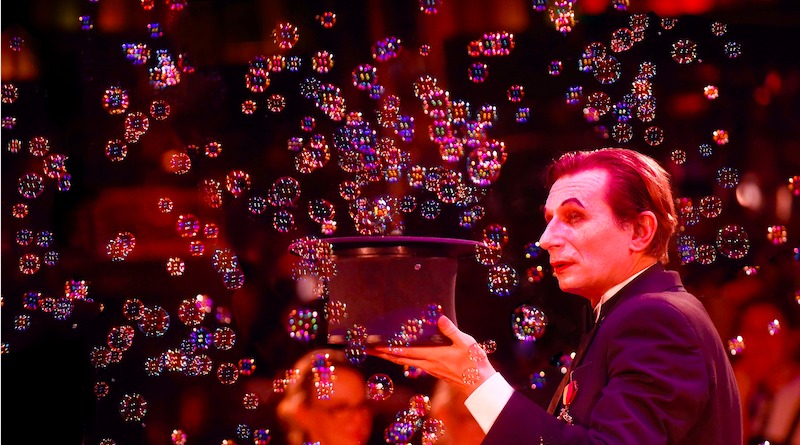 With a show namedLove, Chaos and Dinner, you’d think you’d know what you are about to get served. But in spite of the early warning, Teatro ZinZanni’s iconic dinner show tosses in quite a few surprising ingredients to make the evening veer from happy chaos (who is the dinner staff and who are the performers? How exactly was my salad plate just delivered to me?) to jaw dropping amazement (the circus acts are world class). To that they add a dash of sublime (opera and jazz vocals that are next level) mixed with an irreverent and saucy camp that will make your toes curl, especially if you happen to be in attendance with family members or colleagues. All that is to say, it’s a recipe that works, with daring and exotic flavors, built on the solid base ingredients of entertainment traditions and variety arts theater.

Dinner show theater has a long and storied history in the US and Europe, and its popularity waxes and wanes, but the timelessness of its appeal is demonstrated in the success stories of productions from Randolph Entertainment’s Teatro ZinZanni (founded in 1998 in Seattle) toJoya, the Cirque du Soleil version of dinner and a show.

Adding circus to dinner theater is an excellent way to increase the energy level and appeal of a show, and Teatro ZinZanni’s creative director Norman Langill has struck the right balance. Using seemingly nothing more than the conventions of comedy, circus and dinner show entertainment, the resulting production somehow amounts to more than the sum of its already joyous parts. We’ve all seen cabaret shows with one act strung after the next, with an overworked MC desperately attempting to weave it all together. This is not that show. It’s recipe for success lies in the quality of the ingredients… an intricate web of well-developed characters (thanks to experienced directing and casting by Langill) wedded with seasoned players and performers, and top notch production value, including a live band and the opulent costumes and setting.

A dash of burlesque, a sprinkle carnival, a bit of circus, a heap of Vaudeville, and a sumptuous meal (provided throughout the show by Chicago area’s The Goddess and The Grocer chef, Debbie Sharpe)–these elements are pure magic when combined with the Spiegeltent setting and a constant stream of cocktails. This particular Spiegeltent has a name (Zazou) and a history that was unveiled in Chicago this past spring just before the launch ofLove Chaos & Dinner’s first six month run in its shiny new location on the 13th floor of the Cambria Hotel.

Based on the real estate location alone, it’s clear that Teatro ZinZanni is aiming to be a destination outing, as the minute you arrive in the lobby you are greeted by revelers who guide you to the 13th floor where you are transported to an era of corsets,tiaras, cravats, velvet and lace. This attention to detail does much to create a temporary suspension of modern times–and performers will be sure to call you out if you expose any technological devices during their short reign. The charm of the environment creates a similar aura to traditional circus by whisking you away from reality and your problems. As Stan Feig, Teatro ZinZanni’s lead producer told me in an interview back in May, this is their goal, “When you enter from the street and enter our Spiegeltent, you’ll be swept away, and that’s what it’s about–the experience.”

Throughout the show, as your cocktails and dinner miraculously appear, antics and dramas unfold. The waitstaff and the cast are initially indistinguishable from one another. It is here that the mystery and the meshing of reality and fantasy drives the energy of the show, weaving together the characters with the setting and audience, and creating a memorable world.

At the heart of the experience of the original cast of Love, Chaos and Dinnerare the hosting pair, Amelia Zirin-Brown (playing Rizo) from NYC, and Frank Ferrante actor director comedian (playing Caesar). This pair make the show come alive by bringing the audience participation to the next level with lightning quick improv instincts as they  blissfully seize on the quirks of audience volunteers and enfold them in to the action. They are perfect foils for one another, Ferrante’s character is vain and goading, representing the outmoded alpha male ego by channeling the Vegas Elvis and the Rat pack era while delivering occasional off-color jokes, and Rizo plays it cool, reveling in her rakish ringmistress energy, channeling and elevating the confidence of Mae West, and belting out tunes with such vigor that hearts wilt on the spot.

Domitil Aillot, who trained at Fratellini in Paris, does a powerful and poetic routine with the casual ease of Gene Kelly skittering across a dance floor, but Aillot does this on Chinese pole, serenaded by an admiring Rizo.

Duo Rose’s (AKA Samuel Sion and Sylvia Friedman) aerial adagio on duo trapeze is vigorously romantic and at times jaw-dropping. The beauty of their act is made all the more powerful when placed in to the loose story of their characters, with Sion playing the handyman and Friedman is a server. As they weave their way through the audience, comically doing their respective jobs (measuring, fixing and serving) their love story evolves, leading to the crowning moment of their union– their act on trapeze. Sion’s brawn supports Friedman’s graceful maneuvers as he facilitates her flips and twists seemingly as easily as one turns the pages of a book. Combined with Friedman’s extraordinary contortion skills, it elevates the act into a perfect duet.

Anastasini Brothers Fabio and Guliano are 9th generation circus kin whose Icarian act has all of the elements of great circus: suspense, charisma, danger and acrobatics. Prior to their performance, they bustle around the room disguised as wait staff preoccupied with their hair and uniforms.

Elena Gatilova is from the Ukraine and has worked for Cirque du Soleil and Dragone. Throughout most of the show, she plays the overlooked clown (by way of her job as the janitor.) It isn’t until a fortuitous run in with Mr. P.P. that she gets to throw off her drab garments and reveal her Savorski studded inner-diva on lyra. Her performance is as intense as it is refined, pulling from classical elements of ballet. It drew a standing ovation from the crowd.

Kelly Britt, is a Chicago-based opera singer with a circus lineage as a descendent of Franconi family in Paris. Her role in the show as an eternal sidekick to the comedy deepens on the occasions when she steps out to sing opera songs–bringing the classiness factor back up after it has been playfully shredded by some of her more clown-like counterparts.

Speaking of clowns, Joe De Paul (a clown with an extensive Cirque du Soleil background) and Tim Tyler (AKA Mr. P.P.,originally from Australia but is now based  in Montreal), provide the true comic relief of the evening. Strikingly different in appearance–Mr. P.P. has a somewhat Mr. Bean presentation, and De Paul is short and stocky–their duo energy works on a similar plane to Laurel and Hardy’s. When one is being the buffoon, the other plays the straight guy, and visa versa, unless they happen to be in the mood to egg each other on, as they do in their side-splitting ping pong ball juggling routine. Sometimes verging on the bizarre, their energy is nonetheless contagious and always riled up the audience energy for the next act.