The Circle Project, a FEDEC-led Event at CIRCa 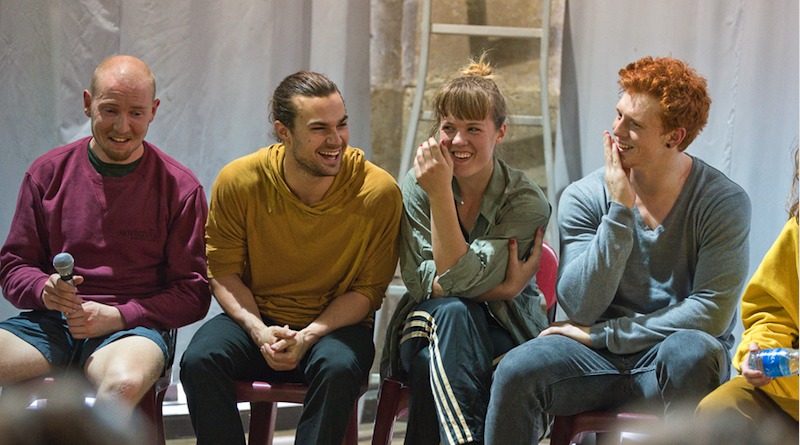 CIRCa, a place of diffusion for circus and performing arts, and FEDEC, the European Federation of Professional Circus Schools which gathers 61 members in Europe and around the world, have been working hand-in-hand for 12 years. Thanks to the CIRCLE project led by FEDEC for the professional circus schools, the Festival of Contemporary Circus CIRCa has become a major annual event at an international level. This pedagogical project promotes the creations of young artists who are still studying, and has transformed CIRCa in to a crossroads of learning experiences.

Through CIRCLE, CIRCa and FEDEC serve complementary objectives which consist of fostering exchanges between the students, and offering them visibility and a collective experience in professional conditions. Eight groups of students, from nine different professional circus schools displayed their creations this year (École de Cirque de Québec, Lido (Toulouse), École de Cirque de Bordeaux, Centre Régional des Arts du Cirque de Lomme, Escuela de Circo Carampa (Madrid), Arc en Cirque (Chambéry), National Center for Circus Arts (London), Codarts (Rotterdam), Cirko Vertigo (Grugliasco – Turin). After the shows, the audience could meet the future artists, an opportunity for the students to speak about their journey, about the creative processes and about the way they work in their schools.

Lido, the school in Toulouse (France), and École de Cirque de Québec (Canada) had the first go with their co-creation titled This. As one student described it :“Thisis what we can accomplish when we work together across borders and oceans.Thisis what we can do when we tell ourselves that anything is possible” This collaboration was made possible thanks to the support of the city of Quebec, which allowed the students from Quebec to go to Toulouse, and vice-versa. For the 2019 edition, the ambition is to enhance even more the collaborations between the schools in the framework of CIRCLE, in order to give the students the opportunity to establish artistic ties and to broaden their horizon. This project also illustrates the ongoing attention paid by FEDEC members to the professional integration of their students.

In addition to this, since 2006, CIRCa has been a key moment in FEDEC’s work program, and an opportunity to reinforce the links between its members. In Auch, FEDEC organises several key meetings for its network, like a General Assembly, a managing board meeting and some focus groups like the one led by the artistic and pedagogical directors.

These meetings ensure continuity with the previous FEDEC events in CIRCa, but it should be stressed that a fresh impetus – resulting from FEDEC’s ambition to open up its approach — has marked the 2018 edition. FEDEC has indeed insisted on its will to foster the transversality between the different actors it gathers. This is reflected by two initiatives which have a direct relevance for the students. The tradition to delegate the presentation of the shows to Tim Roberts, pedagogical director and former FEDEC administrator, has been replaced by a new practice: from now on the students introduce the shows of their peers. This exercise, achieved by the students with a great enthusiasm, is a way to build ownership of the CIRCLE project. We also welcome the effort of inclusion during the general assembly, where the students were invited to share their experiences in Auch. This very first attempt is intended to become a new practice. Paying attention to the feedback of the students is indeed a very concrete and innovative way of enhancing the transversality promoted by FEDEC.At this occasion, Johannes, a student from Codarts, declared : “When we come in Auch, we are confronted to new methods, to different students, we do not stay isolated but instead it is as if we looked in the mirror and it allows us to reflect figuratively and literally upon our practice.”

The European REFLECT project (REFLections and Exchanges for Circus arts Teachers) was also among the activities of the 2018 CIRCa edition. This project – started in 2017 – consists of organizing different Labs for the circus arts teachers from FEDEC schools and an occasion to reflect upon their continuing education needs and upon the supporting of the students’ project of creation in the teaching of circus arts.

The REFLECT Labs (training for circus arts teachers) were planned to take place only twice, but their success convinced FEDEC’s members to double their number. One REFLECT Lab was added between the REFLECT Lab#1 in Turin (March 2018) and the REFLECT Lab#3 in Rotterdam (March 2019). In the framework of the REFLECT Lab#2 in Auch, the teachers were given the opportunity to exchange observation, analysis and testimonies based on the CIRCLE project. This Lab notably illustrates the ambition of FEDEC to enhance the dialogue and the interactivity between its different projects, a dynamic at the core of its next European project. REFLECT Lab#3 in Rotterdam (30/04-3/05/2019) will focus on the role of the teacher in a creative process of the collective project of students. Lastly, a REFLECT Lab#4 is scheduled in Auch at CIRCa 2019 and is likely to focus on the analysis of professional circus shows.

The 31st edition of the Festival of Contemporary Circus CIRCa was the occasion for FEDEC to show some fresh perspectives and to insist on its ambition to continue to involve all of the different actors of the professional circus schools. The next FEDEC European project will be stamped by this new impetus and will be oriented towards more transversality to promote an innovative and active pedagogy for circus arts. Intern -France
Passionate since her childhood about foreign languages, Juliette studied translation and interpretation in Brussels before a Master degree in Political Science and European studies. Her life changed the day she started working in the cultural sector where she has been working since April 2018. She has  joined FEDEC in October 2019 where she can juggle between her interest for politics (as an EU project officer) and her love for the Arts.
Juliette's profile
You are about to enter a members-only zone.
To share this article on your CircusTalk member page and connect with circus professionals from all over the world, sign up now. It's free!
Sign Up
Already have an account?
Log in

Passionate since her childhood about foreign languages, Juliette studied translation and interpretation in Brussels before a Master degree in Political Science and European studies. Her life changed the day she started working in the cultural sector where she has been working since April 2018. She has  joined FEDEC in October 2019 where she can juggle between her interest for politics (as an EU project officer) and her love for the Arts.