The Forgotten ‘Gentleman of Colour’ of the Victorian Circus; Joseph Hillier 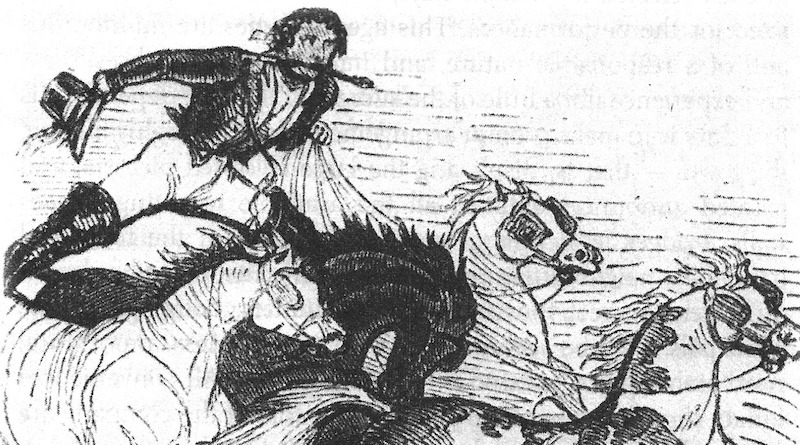 The Victorian era was the golden age of the circus. Popular entertainment for the masses, it embraced all classes of society; from the lowly paid factory worker to the aristocracy, and even royalty. Everybody seemed to love the circus. By the time that Queen Victoria became monarch of the United Kingdom, the circus had been in existence for almost 70 years. From its humble roots with Philip Astley on the banks of the river Thames in London, it had grown into a world-wide phenomenon. In fact, it was possibly Britain’s greatest cultural export.

With its roots in displays of military equestrianism, as presented by the patriotic heroic figure of Astley, one might have expected the circus to become a political vehicle for purely jingoistic equestrian performances. To a certain extent this was true, and many programmes did contain re-enactments of victorious British battles. But what was important was that the circus rapidly diversified to include a wide range of skills; acrobatics and balancing, juggling, wire-waking, clowning, feats of strength, stilt walking, and others. By becoming increasingly more diverse, it also became inclusive. The circus allowed women to compete, and often succeed, in a masculine world and it allowed a growing number of performers from a variety of ethnic backgrounds to prosper. Perhaps the most well-known of these was Pablo Fanque. Born William Darby, in Norwich in 1810, Fanque had an African heritage. Starting out with William Batty’s Circus at the age of about 9-years-old, he soon became an accomplished performer, both as an acrobat and as an equestrian. Often referred to in the press as a “Gentleman of Colour”, by January 1842 he was set to establish his own company and in doing so became the first black circus proprietor in Britain.

However, there was another”‘Gentleman of Colour”, a contemporary of Fanque, who is often overlooked. His name was Joseph Hillier, and he rose to fame with the circus of Andrew Ducrow before setting himself up as an equestrian director in his own right in January 1842, the same year and month as Fanque established his company.

Hillier is a shadowy character and little, if anything, is known about his early years. Ducrow ‘discovered’ him when he took his circus to Milan in 1820 and brought him back to England. Exactly how old Hillier was at the time is uncertain. The three extant records (1) referring to Hillier’s date of birth differ widely and give us a time frame anywhere between 1779 and 1819! Young children were often ‘apprenticed’ to circus owners, but I suspect that Hillier could not have been any younger than four or five years old when taken on by Ducrow.

Hillier was born in Italy and throughout his career he was often billed as the “Italian Rider” or the “Milanese Youth.” In a later insolvency court case, Hillier was referred to as being born in Italy(2). His swarthy complexion and black hair gave rise to comments about him working so hard that he was “black in the face” and at least one nineteenth century writer referred to him in a pejorative term used at the time to denote people of colour(3), although this was often a generic term used to describe anyone who was non-white. A descendent of Hillier provided the information that his father was possibly an Asian Indian seaman, and that he was illegitimate. An illustration in The Squib of 30 July 18424 shows a dark faced Hillier performing (The Courier of St Petersburg).  Although there are no extant photographs of Hillier, there is one of his son by a second marriage, William Angelo Hillier. Joseph Hillier married a Lucy Butfoy and a photograph of her shows her to be distinctly European. The photograph of William Hillier clearly shows a young man with Indian features, so maybe he took after his father rather than his mother. The photograph of William Hillier’s three daughters also show that two of them have distinct Indian features. So it is highly possible that Joseph Hillier was the product of an Indian father and an Italian mother.

Initial research has shown no Italian baptism records for a “Joseph Hillier.” Ducrow probably anglicised the name; Joseph from Giuseppe – but Hillier? We return to the children of Hillier’s second marriage for a clue. Several of them had Italian middle names and the first born in 1862 was named Garibaldi Butfoy Hillier, after his mother’s family name. The second born in 1864 was named Joseph (even more confusing!) Menotte Hillier, presumably after his father’s family name. If so, then searching for a Giuseppe Menotte (and variants) produced a possible candidate; Giuseppe Manetti born in 1813 to a Maria Collini (5). Now, to me, it is a bit of a coincidence that the Italian word for hill should be Collina. Is it possible that Ducrow used this as the basis for naming Giuseppe as Joseph Hillier? Purely a theory at present.

His name was Joseph Hillier, and he rose to fame with the circus of Andrew Ducrow before setting himself up as an equestrian director in his own right in January 1842, the same year and month as Fanque established his company.

Hillier first appeared in England in Ducrow’s production of Cortez, or the Conquest of Mexico at Covent Garden on 5 November 1823 (6). By 1827, he was performing solo (7),and on 4 August 1829 this description of his ‘Cossack Riding’ act was given in the Weekly Dramatic Register:

[Hillier]rode with a most extraordinary power of retaining his hold on the horse, he went at full gallop, tumbling, reeling, under and over, and all about the animal, yet never coming to the ground, with really frightful celerity and cleverness.

In 1834 he married for the first time, to an Elizabeth Reekie. She too was an equestrian and appeared in many of Ducrow’s shows. They had three children together, Joseph, Grace, and Robert William. Grace from a very early age was also performing and there is a record in the Bibliothèque Nationale de France (8) confirming this:

By 1836, Hillier was well established with Ducrow, not only as an accomplished performer but also as the equestrian director. In his displays of horsemanship, he was able to combine his wild Cossack style riding with more traditional British figures. Here, in an item from The Iris of 15 November 1836 is a description of his act “The British Fox Hunter”:

After throwing himself off the horse and afterwards running by its side with the speed of a deer, he would bound on the saddle in an instant, down again in a moment, and planks being placed during the time he was going round [the ring], probably 5 feet high, the horse and its late rider leapt side by side over two or three obstructions placed near together, several times repeating this most astonishing feat of activity.

1841 was a fortuitous year for Hillier, albeit a disastrous one for Ducrow. In June, the famous Astley’s Amphitheatre, of which Ducrow was the manager, was completely destroyed by fire. Ducrow lost everything and fell into a deep depression from which he never recovered. He died in the January of 1842. Ducrow must have held Hillier in high regard, for in his Will he left him the princely sum of £300, more than any other bequest. With this money, Hillier was able to buy Ducrow’s stud of horses and continued the Ducrow name as the sole equestrian director. The following year he embarked on a European tour, to Hamburg and Paris. But all did not go well. It was a financial disaster, and in 1845 he was back in London in the Insolvent Debtors Court (9). Stating that he was illiterate, he blamed the failings on those he had entrusted with his book keeping. The case was adjourned but he was acquitted at a later hearing. After this, Hillier almost disappears from the press. He obviously continued with the circus because he is mentioned in a short item in The Era of 30 January 1848:

Le Petit Ducrow, the adopted son of that “Genius of the Ring”, the late Andrew Ducrow, with Hillier and a small equestrian company in the Mauritius, drawing immense houses

This is the last mention of Hillier in connection with the circus. In 1849, the Bombay Times (10) records the arrival of the Hillier family in India. In 1859, his wife died of dysentery and he remarried in 1862. His profession was given as “Riding Master”(11)and he continued working as such for the Nizam of Hyderabad until his death from cholera in 1876 (12).

Whilst Pablo Fanque is hailed as the first black circus proprietor in Britain, we should not forget the equal success of that other “Gentleman of Colour,” Joseph Hillier. Writer, Educator, Historian -United Kingdom
Steve Ward has a background in theatre and clowning.  He has created and directed many youth circus festivals in the UK, as well as in Germany and Brazil. He has a PhD in the social and cultural history of the circus, and is a member of the Circus Research Network and the Circus Arts Research Platform. To date, he has written five books and many articles on the subject and is currently working on his next book looking at ethnic diversity and representation in the Victorian circus. Steve also lectures on aspects of circus history and has appeared on television and in many radio interviews. He also advises on educational and youth circus matters – and he still finds time to occasionally perform as a clown! Further information on Steve at www.steve-ward.net
You are about to enter a members-only zone.
To share this article on your CircusTalk member page and connect with circus professionals from all over the world, sign up now. It's free!
Sign Up
Already have an account?
Log in

Steve Ward has a background in theatre and clowning.  He has created and directed many youth circus festivals in the UK, as well as in Germany and Brazil. He has a PhD in the social and cultural history of the circus, and is a member of the Circus Research Network and the Circus Arts Research Platform. To date, he has written five books and many articles on the subject and is currently working on his next book looking at ethnic diversity and representation in the Victorian circus. Steve also lectures on aspects of circus history and has appeared on television and in many radio interviews. He also advises on educational and youth circus matters – and he still finds time to occasionally perform as a clown! Further information on Steve at www.steve-ward.net