The Peking Acrobats on Tour 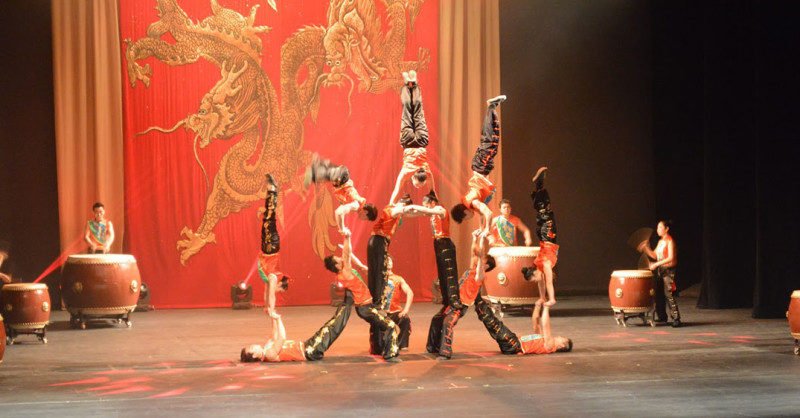 A traditional Chinese circus tours America without blending into or borrowing from the culture.

For one day in early February at Harris Theater in Chicago, the Peking Acrobats brought a 2,000-year-old tradition of Chinese circus, steeped in ritual, highlighting twelve powerful and precise acts, showcasing Chinese musicians, and featuring laser lightshow technology, and put it all together for an intense hour-long performance that was rich in color, textures, and surprises. This rigorous tour, their 28thin North America since 1986, will continue around the USA until April.

The Making of a Chinese Acrobat

The “Peking” in the Peking Acrobats’ name derives from the ancient name for Beijing, and the company is so named because of its cultural connection to the Peking Opera, a type of variety show that has existed since the 18th century and involves drama, pageantry, pantomime, acrobatics, music, dance, and singing. The Peking Opera is a symbolic showcase of human achievement, triumph over struggle, and celebration of beauty that honors Chinese folklore with an occasional nod to modern-day life.

The tradition of Chinese circus arts dates back even further to the Hang Dynasty in 202 BC, when court entertainers were known to please audiences with clowning and acrobatics. Currently, the Peking Acrobats are directed by the Hai family, a third-generation circus family famous for its acrobatic lineage. The public relations kit for the Peking Acrobats carefully explains the process of training its performers to westerners, describing how the future acrobats are chosen as early as age 6 and then trained until age 13–16 whereupon they are usually promoted to a professional troupe. Although most families consider it an honor to have a child selected, they also consider it a sacrifice, since the child will often have to move away to train full time, six days a week after academic classes. In China, a position in a professional acrobatic troupe is considered very prestigious, since it involves international travel. Apparently, it also comes with additional perks that are not commonly accessible to other Chinese young adults, including access to iPads, Kindles, laptops, and other technology that makes it possible for the traveling performers to stay in touch with their families and their culture.

It is clear from the group’s tech rider that it is a tight-knit group that travels frequently, never staying for more than a day or two in one location; the company prefers to set up and tear down entirely on its own in under 90 minutes. Although the troupe tours North America frequently, it does not appear to have any connection with western society or other circus entities in the USA, which is surprising, since professional western circus performers tend to consider themselves an international tribe and typically have connections all over the world. The website and Facebook page for the Peking Acrobats, for example, are not full of pictures of fresh-faced young performers experiencing our culture, signing autographs or attending after parties. Perhaps most peculiar, by our standards, is that nowhere on their program or website is the name of even one performer listed.

But perhaps it is unfair to judge Peking Acrobats’ public persona by our standards. Over the years, it has had several huge gigs in the US, including performances on The Ellen DeGeneres Show and appearances with multiple symphonies in major cities. It even appeared in the Oceans 11 movie and in all of its subsequent sequels. Clearly, performing in movies and with symphonies would require some mingling of cultures in order to collaborate. The fact that the identities of the individual performers are not highlighted as they would be in the western world must then be chalked up to cultural differences and the powerful and long-standing influence of Eastern tradition and philosophy, which tends to deemphasize the individual star in favor of the group act. It is unfortunate however, that there is not more opportunity for circus fraternity between the Peking Acrobats and American circus performers, because the types of skills the performers display and the apparatus they use to perform are clearly related to worldwide circus arts and both nationalities might have something to gain from sharing their art. The Pageantry of the Performance

The show began with a traditional lion dance, meant to dispel bad luck and display courage, strength, and joy. The two colorful lions behaved like dogs as they fetched balls, wagged their tails, and scratched their heads, tongues lolling comically. They were accompanied by huge dagu drums manned by drummers keeping a fierce beat that built in intensity as the lions became more adventurous, eventually having a baby lion, and most notably performing acrobatic stunts on the rola bola and on a ramp.

As the show progressed, the pipa, a Chinese lute; the erhu, a Chinese violin; and the dizhi, a bamboo flute, made appearances with musicians in traditional garb throughout various acts, adding to the drama and beauty of the setting and making the experience similar to that of the Peking Opera. There were lush backdrops, silk and satin costumes, and vibrantly colored props to complete the feeling of having entered the court of a Chinese dynasty. The highest expression of this was perhaps the presence of the Jigu! Thunder drummers of China who appeared in several routines and performed a stunning light-show-enhanced musical piece of their own titled The Sound of Rolling Walnuts.

All Acts Are Group Acts

Most powerful though were the 20 or so circus performers who consistently delivered a spectacular display of strength and poise. They featured a female handstand artist accompanied by a silks artist performing to a lyrical tune, a group of Chinese hoop performers who were able to leap five hoops high and choreograph stunning jumps together, a plate-spinning trio of chefs that managed to get 24 plates rotating, a rousing diabolo routine with four women exotically attired in feathered headdresses and sequined armor, a tilted chair routine called In the High Chair that had the crowd holding its collective breath while five performers climbed up the stack and performed handstands, and a finale that went over the top, with human pyramids and an eight-person bicycle pagoda stunt that was visually stunning. Only one act was a solo. It was a contortion routine that featured a young woman in harem pants on a dais holding multiple tiered candelabras with glasses containing liquid. Even then, she required other harem-clad assistants to bring her the candelabras and to indicate their awe at her skill.

Although the Chinese circus tradition requires no ringmaster or MC, there was an occasional clown present in the beginning of a routine to break up the seriousness of the feats displayed. One act involved an aristocratically attired clown in a traditional Chinese leisure suit admonishing a worker clown in satin overalls until he “fell” into a pipe that was hardly the diameter of a human. The worker clown soon revealed he was able to move through the short pipe in multiple ways, the craziest of which involved folding himself in half. This short routine was the only one that verged on the edge of being a contemporary act, at least in its symbolic portrayal of a privileged versus a blue collar class.

Overall, the performances followed one another rapidly with no pretense of a theme but built momentum, vacillating between masterful expressions of grace and high-energy shows of skill that culminated in the finale, in which every performer was onstage waving a flag, leaping, cycling, flipping, or playing an instrument to end the show with a burst of color and excitement.

Looking for artists with minimum 2 numbers

Looking for artists with minimum 2 numbers