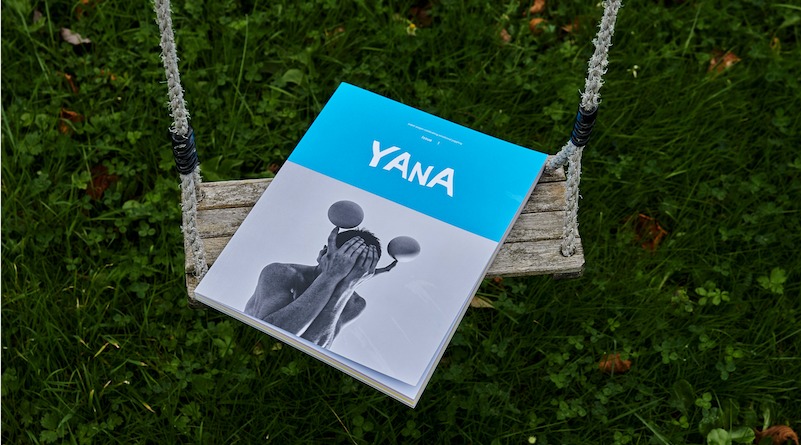 The brainchild of hoop artist Florence Huet, YANA is a new annual publication that taps into all that is independent, creative and experimental in the zeitgeist of the worldwide juggling community. Before YANA, Huet studied entrepreneurship in Paris, juggling technique in Kiev and graphic design in Stockholm. She has toured her solo works in over a dozen countries, and her new publication is a blend of  her juggling, entrepreneurial and graphic design skills combined.

As a left-hander, I approached YANA as I do most magazines, flipping through it backward for first impressions. With this approach, I discovered that this magazine is chunky, independent, visual and textured.  It’s also colorful, diverse, multi-lingual. Weighing in at 160 pages, and sporting sprawling layouts, YANA is more of a juggling journal than a magazine, which makes sense, since the plan is to make it an annual publication.

It explores suprising links between juggling and other activities, like video games for example. In “Clean Laundry, Dirty Laundry” an interview with Victor de Bouvere explores the connection between his collage work and juggling, complete with vibrant collage illustrations. ”My collages, my juggling and my music are starting to make a whole, an ensemble. One day I’d like to combine them all in a performance exhibition,” he explains.

YANA lets artists do the talking with their art–which comes in many forms– and results in a creative presentation that is pleasantly reminiscent of zine culture. This first issue includes poetry, collage, photography, Q&A’s, experiments, testimonies and even a recipe (for compostable firework balls!)

It is a loving tribute to juggling culture, a book about the artistry, not the industry. Huet herself explains it in the intro, stating, “We tend to only be presented as skilled entertainers, with just a select few ever allowed to really make their mark as artists,” and later “We want to give the community a place to challenge our conceptions of what juggling can be and how it can be presented.” She also emphasizes the need for wider representation of jugglers themselves, a group which has tended to be dominated by cis, white, hetero males.

Some spreads of note in YANA, Issue (53)1: “You Are a Cute Little Boy”, the paintings and notebooks of Wes Peden.” This photo spread shows how Peden’s colorful and expressive vision in artwork melds with his enigmatic juggling notes and illustrations to give us a peek into the mind of one of the most celebrated and creative jugglers in recent history.

My other favorites are a photo exploration of “17 Never Juggled Objects” by Eric Longequel (one “object” is a pigeon), and “GAZE”, a photographic interview project involving 10 jugglers from around the world which digs into exploring juggling motivation as well as the regions and lifestyles of the jugglers, all on the film of disposable cameras.

We had the pleasure of speaking to editor Florence Huet about the magazine:

Kim Campbell: Can you explain how you came upon the idea for the title of YANA/You are not alone?

Florence Huet: The title came from a discussion I had with Elias Hedlund, a friend of mine and a very influential club juggler. We talked about the loneliness we face within and outside the community. The difficulty for us to share what juggling means to us with our friends, family or acquaintances. The stereotypes surrounding juggling are so sticky, there are very few representations of juggling outside of traditional aesthetics and we often feel like we can’t even start a conversation about it without carnival music playing in our interlocutor’s head. (It) makes it hard to be taken seriously. This is true within the community as well, which tends to carry on these stereotypes.

The fact that the practice is relatively young and small also makes it hard to have peers you can exchange with. When getting really deep into researching a specific technique, object or concept, it becomes harder to find other jugglers who’ll share a similar understanding of what you’re doing. Practicing or creating can feel very lonely then. That resonated with me a lot, as a hoop juggler which isn’t very common and tends to be looked down upon by jugglers using more traditional props.

My gender also played a big role in people making me feel out of place. The community is very impregnated with conservative values which leave anyone out of the dominant norm to face hardships to feel welcome and keep going.

YANA sounds to me like a friendly name. It comes from You Are Not Alone but it has taken its own personality now. It’s a quiet place, outside of the internet, slow, where juggling and jugglers can reinvent themselves. It’s something you’ll have with you, at home. There’s a postcard you can put on your fridge or on your wall. A reminder that somewhere out there are other weirdos like you, and that you’re not alone.

KC: Reading YANA  feels like witnessing a real labor of love. Was it satisfying to finally hold a copy in your hands?

FH: The first time I held a copy was a really intense moment. I had planned to present YANA at Rencontre des Jonglages, a juggling festival in Paris that managed to happen in between lockdowns. We had delays with the printer that led us to receive the copies on the day of the festival, I literally opened the box at the booth and went through it for the first time as the audience was gathering around to check it out as well. We sold more copies than we received on that day and I could sit down with it only three days later, when I received a bigger batch.

Four months after that, I still get surprised and emotional every time I hold it. So many things have happened that I feel like I haven’t properly processed that it is done and spent time with it. The magazine did start as a project for my best friend’s birthday, so it is indeed filled with love in many ways.

KC: What has been the response to YANA from the juggling community? How has distribution been?

FH: The response has been overwhelmingly positive. We’ve been shipping mags all over the world and received wonderful reviews and photos. I’ve been managing the whole production, communication and distribution by myself so it has kept me very busy and there are a million little projects I had in mind that I haven’t found time to do. That includes better communication, in more languages, and reaching out to stores or institutions that would give YANA more visibility and reach. But big entities in the indie mag network have picked it up, like Stack and Magculture, and it’s been giving me a lot of confidence to keep going and start working on the second issue. I’m really hoping juggling events can happen again soon so that I can present it in person there.

KC: In the intro, you say you want YANA to help create a more inclusive, broad and current view of circus. How do you hope to facilitate that? What are some examples you hope to see in future episodes of it?

I believe that a juggling magazine curated and made by a team of women from different cultures (the first issue was made by me (editor-in-chief)–French living in Sweden, Misaki Fukuda (art director)–Japanese, and Vilma Paasivaara(managing editor)–Finnish living in the UK) is already a big step.

In the way we select and reach out to contributors, I’m working to reach beyond my own circles and look for people who tend to be under-represented in the community. For example in the next issue, the project Gaze (photographic interviews of jugglers around the world) will be made again with new people. Anyone who juggles can be part of it so I’ve decided to look for indigenous people who juggle as a criteria to narrow down my research. I don’t know if we will only select indigenous people in the end, and it probably won’t be said, but setting these types of rules forces me immediately to rule out most of the jugglers we already know of.

The magazine is multilingual – all texts are in English but some original versions appear in the author’s/interviewee’s native tongue as well. That’s a way for me to have more people recognize themselves and have access to our content, as well as represent the internationality of our community. And when we work with gendered languages such as French or Spanish, we favor inclusive writing and neutral formulations.

We have also launched an initiative to support solidarity amongst jugglers. On this page, people who can’t afford a magazine can put their name to be selected to receive one for free. There is also a place where one can donate money, and every time we reach 25€ of donations, the price of one mag, we will randomly pick a name and pay for the shipping to their location.

KC: Who can contribute to the next YANA?

FH: Anyone is welcome to write us. We are mostly looking for people who either have other creative practices or have a conceptual approach to juggling, but not only. We invite and will prioritize contributions from women, non cis-gender, black, brown, and indigenous people. We have a section for non-jugglers to share their views about juggling from an outsider perspective. Creative jugglers tend to be quite shy and stay under the radar, so we are very thirsty for recommendations. Who is that one juggler you’ve been inspired by and that no-one knows of?