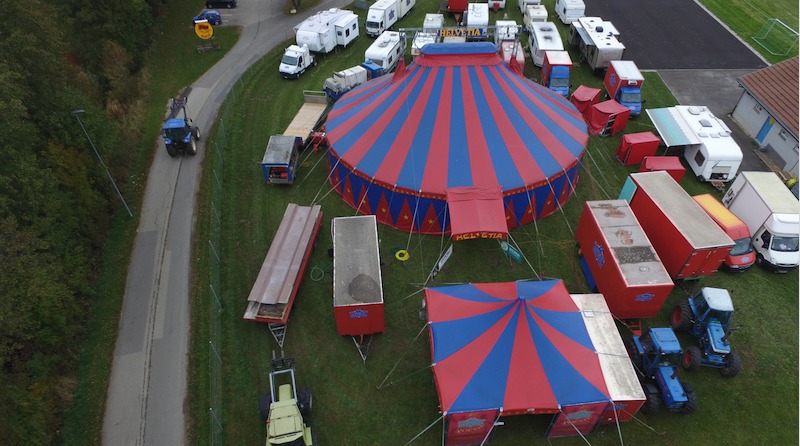 Normally the seasonal premieres of the Swiss circuses are as much a part of spring as the first flowers and buds on the trees. But this year everything is different, surreal, unthinkable. The coronavirus has a firm grip on the world – with repercussions not only on our private lives but also on the Swiss circus scene.

Switzerland was one of the first countries in Europe to respond to the coronavirus at the end of February by banning major events. The traditional Swiss circus Stey, for example, was affected by this, postponing its premiere and cancelling the first performances. Cirque Helvetia was still able to hold its premiere and celebrate its 45th anniversary, but here too, the tents were taken down again immediately afterwards. In retrospect, the early cancellation of the Artistika Festival in Visp also proved to be foresighted. Immediately after the first restrictions were announced, the organizer Karim Habli invited all to a crisis meeting. It was a decision to be made: go through with the risk of being stuck at all costs in case of a late cancellation, or cancel and find a solution with the artists and sponsors. The decision to cancel, combined with the understanding of all partners, Habli is now certain, has saved the Artistika Festival from financial ruin. This is because the so-called lockdown has been in effect in Switzerland since March 2020. Circuses and other event companies have to cancel their performances completely. Until at least the end of August, major events with more than 1000 people have been cancelled. It is still uncertain how things will continue after that. YOUNG STAGE, one of the world’s most renowned circus festivals, which has been postponed until autumn, is one of the events affected.

The traditional Swiss Circus Stey currently stands in Volketswil. The masts of the chapiteau tower desolately against the sky. Spectators cannot come, but the costs are there. In addition to the lack of income, there are expenses for printed but unused advertising materials. Running costs for energy, water, social security contributions and of course wages are still incurred. In addition, there are at most space rents. Moreover, it is difficult for circus companies to get a loan to survive the crisis. For this reason, the fan club of Circus Stey has decided to start crowdfunding.

Another place, similar picture: Circus Harlekin stands with its staff and artists on the premiere square in Thun. Waiting and hoping is the order of the day. Hoping that the tour for smaller circuses with a capacity of less than 1000 people can start as early as summer. Until the beginning of June, however, there is a ban on gatherings of more than 5 people in Switzerland. Hope, however, that after the crisis people will again have the desire and confidence to join a circus.

The Gasser family’s Cirque Starlight has completely cancelled its tour. During almost two months the artists rehearsed the new production Symphonie Lunaire under the direction of Christopher D. Gasser and Laetitia Kohler. Program booklets were printed in vain. Because the show could never be performed in front of an audience. They had the idea to do the “premiere” without an audience on location, but with a Livestream, but the Livestream did not work out because of the short time frame. Most of the artists travelled back to their home country sad and depressed. But since the Starlight tour would have lasted only until mid-June anyway, it was the only right decision. Now it is planned to present the production Symphonie Lunaire next year. But there is still a long way to go until then.

The newly founded Grisons Circus Maramber also wanted to go on tour this year starting in spring. For safety reasons, however, the tour has now been cancelled and will not play again until Christmas. Dominik Gasser’s Circus Olympia and DER CIRCUS are also not publishing any further tour dates on their websites for the time being. It is uncertain when the tour will continue. Belli’s Mini-Freizeitpark by Daniel Gasser also had to close its doors.

The Swiss National Circus Knie, the largest circus in Switzerland with around 250 employees, has also been hit hard. The new production was rehearsed for weeks in collaboration with Circus Flic Flac. The grandstand was rebuilt, a new stage and a new artists’ entrance were purchased in order to be able to stage the spectacular artistry from Flic Flac in the best possible way. But also here: No performances, the pre-selling of tickets is paused. At the moment, the Knie family expects to be able to carry out a shortened tour. For this reason, the whole tour was newly planned. Performances will be postponed; tickets must be refunded. Short-time work had to be announced for the employees. There are immense organizational challenges that must be mastered at the moment. The Knie family is very concerned and hopes that the measures taken will soon change the situation for the better. They are also grateful to the authorities, with whom they are cooperating very well, as Fredy Knie junior recently announced in an interview.

A similar picture is presented by DAS ZELT, which has also applied for short-time working. In an interview on persoenlich.com, Adrian Steiner says that the tour is currently being rescheduled and that important cities such as Zurich in autumn are to be made up for. One could survive such a ban for a few months, but if it were to last a year, it would become existential.

Moreover, the question remains whether people are ready to go back to the circus after the corona crisis and whether they have enough money to do so. In addition, there is a threat of oversupply in Zurich, for example, as Cirque du Soleil, Ohlala and Circus Monti are also scheduled to perform in the region in autumn. Speaking of Circus Monti. This circus is not scheduled to go on tour until the second half of the year. But the company from Wohlen is also affected by the crisis. The Muntwyler family has established a second mainstay with tent rental. Since all events had to be canceled, most rentals are canceled, too. This is especially the case as the big festivals in summer are no longer the main customers this year. For this reason, the company offers its own machines, such as telescopic loaders and Bobcat compact lifters, together with experienced machinists for rental.

The Swiss circus schools are also forced to suspend their courses until at least mid-May. Freelance artists, on the other hand, must suffer massive losses of income, as there are no longer any opportunities to perform. And yet they stick together in this difficult situation and try to distract themselves with online challenges in social media and keep fit at the same time.

The Club of Swiss Circus Friends CVA has called for a fundraising campaign due to the corona crisis. The money will be used to support Swiss circus companies. By the end of April, over 20000 Swiss francs had been collected. But this is not the only initiative of the club. In addition, the attention of the Federal Department of Finance, the Federal Office of Culture and the Pro Helvetia Foundation was drawn to the difficult situation in the Swiss circus, variety theatre and performing arts industry. In the hope that the motto will soon be: “Let the show begin!”

This article was first published in Circus Zeitung in April 2020

Even as a small child Randy Scheibli was fascinated by the circus world. This led him becoming a member of the Club of Circus Friends of Switzerland and he is still working as an editor for the CircusZeitung today. In the meantime, he has turned his passion into a profession and works in the marketing department for Swiss National Circus Knie. In his spare time, Randy Scheibli is also active in the circus school Flyingdance in Zurich.