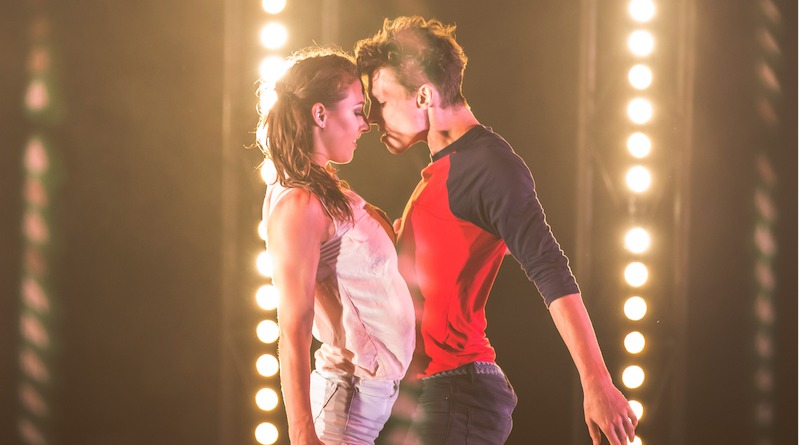 Eight high school students fuss about their looks, jockey for social position and explore romantic relationships with one another in the tradition of a romantic comedy, and with circus as the catalyst for the plot. Short Round Productions presents Filament, an acrobatic coming of age story. The lone American production at Underbelly’s Circus Hub, this show delivers the quintessential American perspective of optimism and lends the circus arts a sense of polish that we tend to associate most with Broadway musicals. It is also the first contemporary circus show I’ve seen that unabashedly embraces the appeal of American pop culture, which everyone knows is a cultural export with impressive financial impact.

What is different about this rom-com is that the hormonal high school students express their individuality though their circus disciplines. For example, there is the classic scenario of the new kid CD (played by Bertan Canbeldek) needing to make an impression in order to be invited in to the social group. In this case, he begins to bounce juggle and dance and the gossiping cliques pause and watch, slowly recognizing that he could be an interesting member of their group. The awkward girl with glasses (Leslie played by Allison Schieler) has an instantaneous crush on him and is coached by the popular girls (led by Ting played by Jess Mews) on how to catch his interest by parroting sexuality and rejecting her own mannerisms. One guess if this technique works? Why no, of course it does not! Even with the naivete of a coming-of-age tale repeating the mantra of American values, the allure of these characters is strong. Oh, and surprise, the awkward long-haired boy Steven (played by Tom Ball) who doesn’t quite know where he belongs (and who consults everyone on their clothing choices) discovers he is gay when his attraction to a seemingly straight boy arises (Rufus the hand balancer, played by Mark K. Stewart). The result is one of the most poignant dance duets of the show, conveying all of the frustrated sexual longing of every confused teenager since time began. 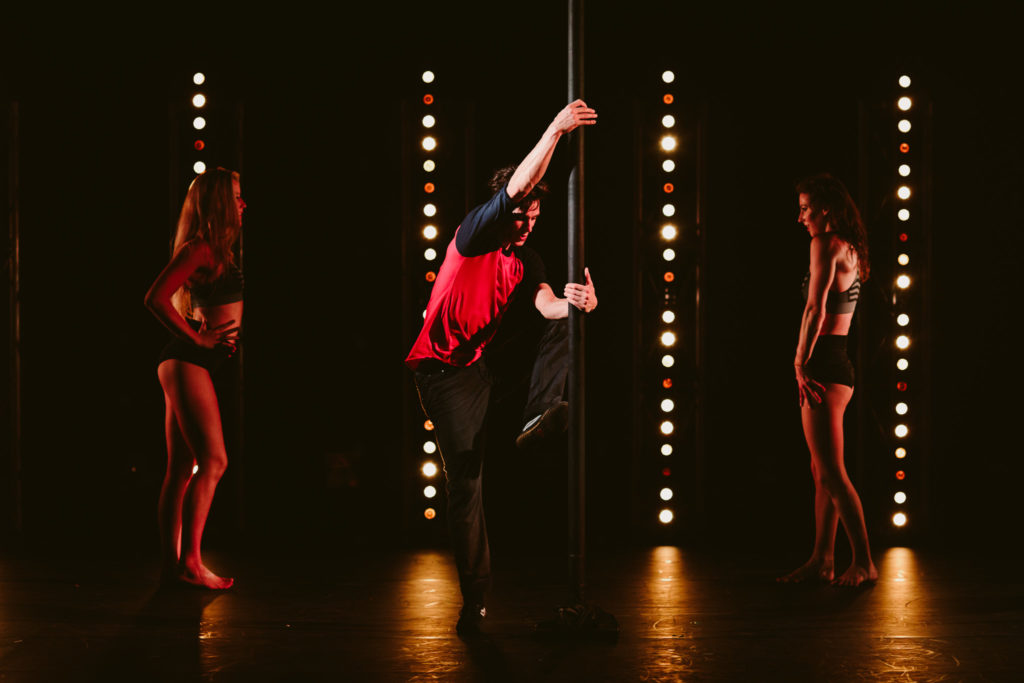 Is it Shakespeare? No. In fact, there are no words at all in the show, which makes it even more brilliant, since every nuance and emotion is conveyed through physical motion, circus solos, circus duets, silhouettes, dance numbers and human interaction. The dance numbers follow in the tradition of musicals like High School Musical and Grease and are assisted in creating that Broadway vibe by glossy lighting design (by Brian Kim) and a pop musical score (sound engineering by Christopher Given Harrison) as well as spot on costume design by Malia Miyashiro-Harmon and Odile Hautemulle. The formula is so simple and so satisfying—friendships explored, romances develop, loyalties are tested, angry hula hooping happens from Mews, along with a trapeze act full of self-loathing by Ball, a self-absorbed Cyr wheel number unfolds (by Chester aka Oscar Kaufman), and a heart-broken lyra act by Sara (played by Bekah Burke)shatters your heart, to name just a few of the transformations that keep us invested in the story.

In a festival full of intense think pieces, Filament has its place as a tonic, the kind of guilty pleasure that reduces weltschmertz–where you can simply enjoy great circus while the familiar odyssey of teenage self-discovery unfolds. Although the plot formula may be straight-forward, the show concept is not an easy one to pull off. It requires a stellar production value and flawless timing and delivery to keep the world intact.

Fortunately, the multi-talented circus artists of Filament are world class circus performers who are equally gifted as actors, embodying their character’s stereotypes with complete conviction, delivering their circus skills both poetically and powerfully and bringing that unassailable American ‘je ne sais quoi’ to the production as a result (although not all of the cast members are American of course!) That vision comes from writer and director Joseph Pinzon, assistant director Tanya Burka and dramaturge Teri Gamble.

That Filament isn’t booked for a yearlong off Broadway run or alongside some giant teen musical festival is just a sign of how far behind the circus programming network is in the US and how reluctant the broader industry of cultural programmers are to even see circus, let alone program it. But fortunately for Short Round productions, the massive cross-genre appeal of circus is starting to build at international circus festivals like Edinburgh and Adelaide (where Filament won the Weekly Award in 2017). Do yourself a favor, and escape for a night back to the drama-filled hormonal world of your teenage years. Filament plays at the Circus Hub until August 24th.

Editor-in-Chief at CircusTalk.News, Writer -USA
Kim Campbell is the editor of CircusTalk News. She has written about circus for Spectacle magazine, Circus Now, Circus Promoters and was a resident for Circus Stories, Le Cirque Vu Par with En Piste in 2015 at the Montreal Completement Cirque Festival. She is the former editor of American Circus Educators magazine, as well as a staff writer for the web publication Third Coast Review, where she writes about circus, theatre, arts and culture. Kim is a member of the American Theater Critics Association.
Kim's profile
You are about to enter a members-only zone.
To share this article on your CircusTalk member page and connect with circus professionals from all over the world, sign up now. It's free!
Sign Up
Already have an account?
Log in