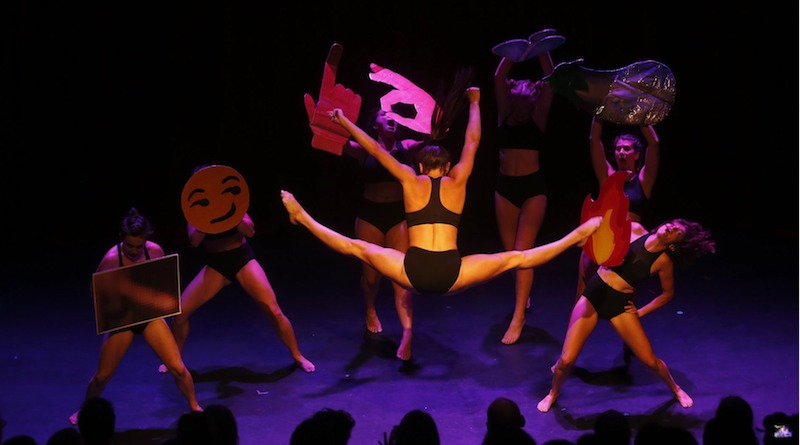 Sitting with Lauren Eisinger before a day of triple Australian shows at Underbelly’s Circus Hub, I had a chance to discuss their programming choices for the year. Although this venue on the meadows in Edinburgh is not the only venue in town to program circus, it is a cocoon of circus in a wilderness of entertainment, with one Spiegeltent and one big top vying for attention and housing 12 different shows (seven from Australia) with very different vibes. All three Australian shows I review here were in the Spiegeltent, an intimate and elegant setting that amplifies the Aussie penchant for bombastic humor, which is only a small facet of what we got at the three shows programmed there, Yuck Circus, Le Coup, and Rouge.

About the influence of Australian circus, Eisinger says “Its growing and growing. Australian circus has a reputation for being raw and stripped back and edgy and very charismatic and endearing. Its tends to be acrobatic based.” She was spot on about the three shows, all of which toy with edginess in different ways and all have a good supply of charisma to spare, with the acrobatics being de rigeur. To this edge, each company adds their own mission and aesthetic, giving meaning to the circus they bring, and attempting to express with their bodies what words alone cannot convey.

Starting off the day with Yuck Circus was a good choice. This group of seven women, some recent graduates from NICA, have won multiple awards already at Adelaide (emerging artists) and are bound to score a few more laurels to list on their flyers here in Edinburgh.

Beginning the show with a powerful group impersonation of the kind of inappropriate men that young women run into frequently on their travels through life, we are immediately drawn into their world. Strutting about the stage, flexing muscles, and drawing your eyes to their sizable bulges’ are just a few of the encouraging opening moments the audience experienced. It takes good comedic timing to know what lines to walk up to and what lines to cross, and the circus artists of Yuck Circus have this timing down as solidly as they have their acrobatic and circus chops. My jaw dropped in response to their acrobatics as often as it did to their cheeky antics. But their comedy isn’t simple buffoonery for its own sake, but rather a parody of some of societies less charming elements, such as sexual harassment.

Jessica Smart, Abbie Madden, Emily McDonagh, Karla Scott, Brooke Duckworth, Georgia Deguara, and Ella Norton make up the gang who cycles through the problems of young womanhood, quite like the German show Raven addressed the issues that arise for mothers. The issues of the young women are not entirely dissimilar: self-confidence being the overarching theme for both. With good humor Yuck Circus takes on such relevant subjects as the shame attached to periods (with some storytelling and a lively dance number/re-eneactment), the excesses of binge drinking (and the horrifying places and states they woke up in after such occasions), the bombardment of unwanted attention via inappropriate texting (an acro- dance with aggressive emoticons), and the loneliness of single life alleviated by the empty comfort of a junk food that shall remain nameless.

With a femme-positive musical score, an irreverence for taboos (packers, privates and penises are addressed in surprising ways) plus the infectiously rowdy teamwork of Australian ensemble acro, these women toss out their jokes and poignant moments with equal aplomb and without ever getting preachy. Although their approach is by no means subtle, still on the night I saw them, their message did seem to be going over a few heads in the audience that were prone to wolf-whistling, although those clueless people were few. In a chat after the show, Deguara described their challenging mission as one that aimed to ‘celebrate women without alienating men.’ And she also explained how they didn’t want to be defined or limited by their  topical choices. “Sometimes I think it’s a cop out to be an all-female circus that just talks about gender issues. But it came down to the idea that we wanted to talk about what was relevant to us.”

Brisbane-based Company 2’s mission is  ‘Creating work to push the boundaries of circus in ways that is accessible to audiences.’

In some ways, it seems as if Yuck Circus could have been made in direct response to Company 2’s lively show. The women of Yuck Circus begin their show as women impersonating the posturing of mustachioed macho men, while the performers in Le Coup begin their show posturing as macho men, ironically of course (as the eyeliner and hipster mustaches indicate) but somehow they end up recreating the energy of fight nights and adding circus as a metaphor for the actual rumble, although they do take care to add some kick-ass women into the rumble as well–because Australian circus generally tends to strive for sexual equality in their acts. This tendency harkens backs to the early and political days of Rock-nRoll circus that emerged in Australia in the 1980s and that evolved into the companies which now influence today’s thriving industry there.

But Company 2 created Le Coup as an homage to an Australian tradition whose cultural nuances might be lost on the rest of us. According to the charismatic show host and hair hanger Marianna Joslin, who I spoke to a few hours before the show, the idea comes from a notorious Australian rumbler and from the carnival tradition of brining outlandish boxers into town to challenge the locals.

Billed as a ‘neo-vaudeville speakeasy” the beautiful costumes, velvet, ruffles and bowties certainly augmented their positions and fit in perfectly with the Spiegeltent setting. And the iconic character names like Sister and Ugly, along with the sporting gentlemen vibe matches the quirky Vaudeville style acts, like the bowling ball/contact ball act and plenty of toss the girl style acrobatics accompanied by instances of live jazz music and some raucous gambling. This lively show with its ensemble cast (Phoebe Armstrong, Alex Weckes Huck, Ellie Cox, Casey Douglas, Mariana Joslin, Grant Arthur, David Trappes, Ben Harrison and Bonnie Stewart) stays true to its own world and also fits with the world view of Australian circus (the boisterous humor, the strong emphasis on partner acrobatics) while still staying aligned with Company 2’s old-timey aesthetic and commitment to being accessible fun for the general public.

Where the ‘edgy’ comes in for Company 2 in LeCoup is simply in the risk, although there is a tendency to romanticize the risk and the characters. This is done humorously but at times it can distract from the acts themselves, as with cross-dressing Barry, whose sole cross-dressing endeavor was to wear an array of lacey gloves while otherwise being a sturdy base, or when the murderess chanteuse finally gets her moment in the spotlight to sing a lilting number about how she murders her lovers. As a late night and spicy form of entertainment, the cast of Le Coup will certainly grab your attention and hurl it around like the barrels and bowling balls they juggle throughout the show, and this is what many of us expect and want from circus, so why not lay your bets for the winning rumbler and join in?

Also at the Spiegeltent on a mission, was the show Rouge by Highwire Entertainment. As the host Paul Westbrook charismatically stated in their show, their mission is to celebrate all types of sexuality through circus, which they do in a comical cabaret/ensemble fashion. Billed as ‘circus for grownups’ they toy around with acts involving whips, hoops, fire, bondage, burlesque and sultry acrobatics. Bedecked in dramatic layers of red and black, the cast flirts with one another in an attempt to arouse the audience’s enthusiasm, but being Australian, they don’t keep it up for long without a gag emerging, be it a strap-on carrot, a unicorn bondage headpiece, or an opera song whose pitch is heightened by the presence of others under the singer’s gown. Like Yuck circus, boundaries are crossed, but these boundaries are crossed more for the sake of shock and awe than for inspiring new perspectives.

Yet the decadence is riveting in its own way, with the dancing smashing as hard as the circus does. The ingredient that really makes the show work is its Victorian counterbalance of decorum and ritual expressed in the over the top Vegas-like costumes and especially in the beautiful operatic singing by Issie Hart. Speaking of circus, the acrobatic leaps of flyer Madison Burleigh with Liam DeJong are so clean and precise as to inspire double takes, and the aerial act by Westbrook on straps brings a welcome shift of energy from the frantic naked hooping and dancing with a lampshade on.

Two artists in particular dominate with their multi-disciplinary skills as well as their personalities, host Westbook (who dances, MC’s, flirts, does a powerful Lyra act and a duo on straps) , and the multi-talented Jessie Mckibbin who performs with fire and whip, and on trapeze before performing an eloquent Cyr wheel act with partner Lyndon Johnson.

As for celebrating all kinds of sexuality, their mission is consciously accomplished in a vague way, not so much as a political statement–as at no time is Rouge highlighting or advocating for any particular type of sexuality. Instead, watching this show, you get the impression that sexuality is a big pool through which the performers happily swim in circles, brushing up against each other randomly in an orgiastic state of mind. As such, it can take you just far enough out of your comfort zone to feel a thrill, and the hitch is, they do it all with circus.