Response to “Circus of Tomorrow?” Article 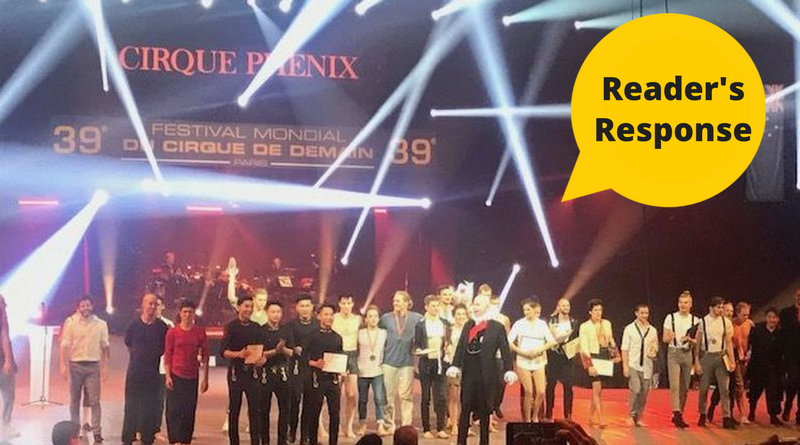 My argument is with this excerpt of the Circus Talk article that is getting so much attention:
“…for the most part, the mixed-gender acts stuck to traditional gender norms, with stereotypical representations and narratives: women flew, not based (a noteworthy exception was Viivi R. & Fragan G. Duo, where the woman based the man on rope); most of the women’s costumes were dainty, revealing and full of Swarovskis; their figures petite….Beyond the lack of women’s acts, there was also a painful absence of representation that breaks the stereotypes of women in circus.”

To me, this is an unfair, superficial, and very short-sighted review of the acts with female artists. To the author, did you actually watch the acts with an eye fit to review them? First of all, the only swarovskis were on the male Chinese handbalancer and the female costumes were not dainty or revealing as compared to the men in my opinion. Check the photos!

I don’t mean to speak for the other artists so I’ll say that this is how I perceived their acts:

Lea Hinz of Artcore was a strong and stoic force in a story of friendship between three people.

Alex Royer ran the shit out of the Russian bar trio act. Taking all of the risk, a high level of strong technique and dance with her male counterparts, she was the commander of that act for sure.

Eve Bigel played the role of insomnia inside the mind of her male counterpart in a super interesting hand to hand act where she was eccentric, angry, and wild.

Melanie Dupuis of the duo trapeze act played an introspective, inquisitive, dynamic character – exposing the humanness within her partner.

My act (with Andrew) was probably the most heteronormative to be honest because we are a man and a woman and the act is really about love – but it is also so much more, and we made SURE that I was never “just an ornament” or a “helpless woman” only interested in seeking the attention of her male counterpart. Our act is about supporting each other, it is about trust, commitment, and friendship. Andrew and I share the workload of technique. While he was recovering from his injury, we choreographed transitions where I would lift him because he wasn’t able to lift me yet. When he got better, we switched things for him to lift me because that shit hurt and it really didn’t make sense for me to kill myself when I no longer had to.

Not basing doesn’t mean you are giving in to the unhealthy status quo of gender norms.

Anyway, this is not to take away from the main point of the article and the issue with lack of representation in general – not just women but people of color, queerness, disability, people of different sizes, etc etc. I understand and very much agree with the main point but some of the comments about the acts themselves didn’t sit well with me.