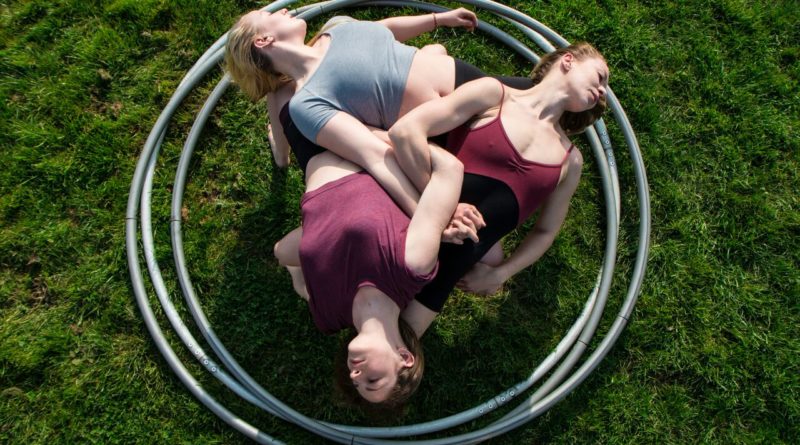 What do you get when you combine the Udderbelly Festival and London Wonderground Festival? You get Underbelly Festival, a mash-up of all of the good things like circus, cabaret and comedy– and in this case, some family entertainment as well. The festival is so huge that it spans the whole spring and summer in London’s Southbank, launching on April 28th with an Opening Gala and ending in late September.

The circus line up promises to be an exciting one. The ever popular Australian company Casus will present its London premiere of their new work Driftwood. Another Australian company with a different angle is Briefs Factory performing their much lauded risque, gender bending show Second Coming.

Flip Fabrique from Canada will present their newest show Attrape Moi (Catch Me), and the three person cyr wheel troupe Alula will be on hand with their powerful new show Hyena described as ‘boisterous, playful and wild…a synchronized display of sisterhood, strength and power.’

We had the opportunity to talk to Underbelly Festival producer Vikki Mizon about the role circus plays in the festival,  followed by a quick question or two for some of the companies like Alula, Flip Fabrique and Casus.

Why is it important to have a variety of arts represented in your festival and why do you feature circus so heavily?

We’re keen to appeal to as wide an audience as possible and lucky to have such an amazing festival site on the South Bank that’s accessible to families, tourists, culture vultures, and people of all ages and backgrounds, and circus is a genre that can appeal to all of these groups; its visual nature and innate sense of fun means that a lot of it is family friendly, it doesn’t rely on the audience speaking English, and is a bit different from theatre and comedy, which appeals to younger people who are always on the hunt for something new.

We feature circus so heavily for a number of reasons – firstly, it’s a fascinating emerging art form. Every year we see more and more exciting circus companies emerging presenting really interesting, original, fun, entertaining, challenging work. Underbelly also run a Circus Hub at the Edinburgh Fringe where we try and support international and home-grown artists and present the best in circus to a UK audience, often the circus shows that come to London are ones which we’ve tried out in Edinburgh. We’ve also presented circus shows in our Spiegeltent at Edinburgh’s Christmas and at Udderbelly Festival Hong Kong, so our commitment to circus is something that stretches across a lot of the festivals we run. We believe in supporting circus, whether that’s bringing world-class companies like Circa to the South Bank, or supporting emerging home-grown artists like Barely Methodical Troupe whose show Bromancewe presented on the South Bank in 2015.

The ticket prices are fairly affordable. Is it part of your mission to reach larger audiences this way?

Absolutely –we want to keep the ticket prices as low as possible so that as many people as possible can come, and ensuring that we appeal to locals as well. We want to reach the widest audience and also so that people aren’t put off taking a chance on something new. That’s one of the real advantages of being a festival – we have a really engaged audience who often go and see a wide variety of things across the summer on the South Bank.

Congratulations on your debut! Since you have an all-female cyr wheel troupe we must ask how can circus artists help smash the patriarchy?

We wanted to make a show about ‘womanhood’. There are many shows with one or two women who are thrown around or act in response to the male gaze. We want to celebrate the female form, beauty and darkness. We wanted to make a show about passion, strength and complex relationships without the presence of sexual intrigue, submission or big strong men to throw us around. We are one of the many fists in the fight against patriarchy!

Can you share a best/worst festival memory from one of your recent tours?

One of my best, and simultaneously worst, moments from touring was at the Edinburgh Christmas festival in 2015. I received a note from a director to give more space to one of the other acrobats on stage, and so I did.  Forgetting that most Spiegeltent’s have super tiny stages, I stepped back and realised there was no more stage left and landed in the laps of some very kind women in the front row. We laughed it off, I got back on stage and continued the show with the rest of my ensemble laughing at me, it was a great show though!

What is something exciting about your new show Driftwood?

Something exciting about this show Driftwood is our new ensemble! We’re a new group of artists working, creating and living together and we have a really amazing opportunity to get to know one another on stage at the same time as getting to know each other in real life and that feels really special to be a part of. I’m most excited about performing Perch, in the show, which is a new act for me and David, who is basing it. Handstanding on a pole, balance on David’s head is nerve wracking and exhilarating and I never imagined having the opportunity to learn something like that in my life!

What are the pluses and minuses of being on tour with your close friends?

We always travel with our family, so whereever we are, we feel at home! However, it can get difficult with the schedule and traveling around can get hard in between shows. But for our show at Underbelly in London we will stay at the same venue for 8 weeks… so we will be top shape!

During Catch Me (Attrape Moi), we have a popsicle contest, with the one that eats a freezing popsicle the fastest winning. There was one performance in Mexico where we had no freezer… so the popsicles completely melted! So instead Jade arrived onstage with apples… without going into details – I can tell you that it wasn’t pretty when we attempted to eat five apples really fast!

What is the next stop for Flip FabriQue?

Here in London! We’re so excited, it will be great to be in England. We are looking to push these opportunities more and more. We also have many projects on the table and 2017 is a big year for us with three shows running, many ideas and new creations to come!

The Underbelly Festival Opening Gala happens tonight (April 27th) and kicks off a full summer of entertainment. To read further press coverage, visit here. You have the option to follow them on social media if you can’t make it in person.