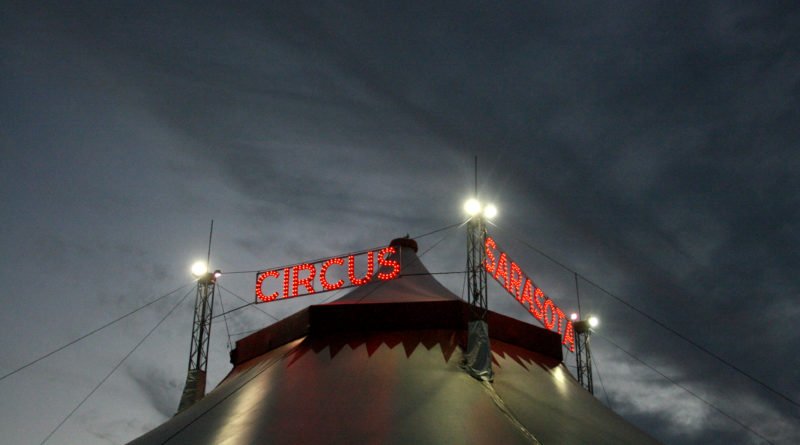 Taylor & Kelly Spring are a nouveau circus family, and just like the old circus families they are continuing the tradition of living, breathing and eating circus every day as well as passing on the skills to their child. Although they weren’t born into circus like many of the families that work under the big top, they are welcomed, since the population of circus dynasties has dwindled over the years and new blood is a boon, especially when it is as versatile as Mr. Spring (Taylor’s stage name), the hand balancer and acrobat.

An equal but different talent is his wife Kelly Spring, the photographer and hooper who found herself documenting their time in Sarasota this past winter as a way to both distract herself and rekindle her love affair with the medium. Although she spent much of her time chasing their toddler around and  craning her neck to watch her husband traverse a one inch thick cable 26 or more feet in the air, she managed to capture a lot of the magic that lingers in big top circuses to this day. What follows is Kelly’s,(and adorably Jemma’s) story and photojournal of backstage and behind-the-scenes moments during their time in Florida this past winter, as well as portraits she captured of the cast of Synergyby Circus Sarasota.This coming year, Mr. Spring plans to join the remounted Big Apple Circus as part of the Wallenda troupe.

The Show Must Go On

Synergy, Circus Sarasota’s’ winter show featured world class acts, and set in the beautiful Nathan Benderson Park. Circus Sarasota is a one ring circus produced by Pedro Reis, featuring circus stars like aerialist Dolly Jacobs, Fumagali the clown from Italy and Nik Wallenda & his troupe and many more. The day before the show opened the Wallenda troupe endured an accident when the 8 person pyramid collapsed to no net below. In true circus fashion, the show did go on and the Wallenda troupe debuted an highwire act the very next day after 3 troupe members were seriously injured.

The combination of beautiful & terrifying is an aesthetic that I am typically drawn towards as an artist. Those two characteristics are so prominent in life and in circus. It is easy to see how the highwire act provides a powerful metaphor for life; speaking to elements of balance, risk taking, conquering fears, as well as physical and mental mastery. It is an act that can be perceived as conquering the impossible.

Life Behind the Scenes

Portraits from Beyond the back curtain

Kelly’s Story Kelly grew up drawing and painting. An all around creative child, she became fascinated with photography in high school. She went on to earn a BFA in photography from Columbia College Chicago. Kelly freelanced for many years. As a working artist, she discovered you have to have diverse skills yet be specialized. So she filled many roles from practically every type of photographer, from teaching artist, to curator, photoshop technician, graphic designer, web designer, to grant writer. The list goes and includes creative tangents like hula hoop artist and jewelry maker. Kelly once worked for an online telephone directory photographing every business in two south side Chicago zip codes. One of her most treasured jobs was photographing a small portion of the collections at the Newberry Library including the entirety of the Popol Vuh, the Mayan creation story, native American ledger book drawings, and antique maps. Taylor’s Story Taylor Spring is primarily a hand balancer, but also skilled at hand-to- hand acrobatics, contortion, tumbling, aerial straps and other ground acts like rolla-bolla, juggling, and fire dancing. He spent his childhood training gymnastics with world renowned Olympic gymnasts from Bulgaria, Ukraine and Belarus at various gymnastic clubs and at Oklahoma University. Most recently he’s trained handstands with Nourbol Meirmanov at MSA & Circus Arts. Spring has an incredible hand-to-hand act with former Ringling Bros strongman Battulga Battogtokh. While Kelly is calmness incarnate, Taylor is the epitome of a free spirit, having walked across the state of Colorado as a teenager. He learned volumes from his times living outside in national parks. He loves a physical challenge. Spring has spent the last 4 years not only making a family but also making a name for himself in the Chicago circus/cabaret /event performance scene. He recently founded a monthly circus show Fly-by-Night Circus at MSA & Circus Arts in Chicago. He will work with the Wallenda’s this summer in Atlantic City, and hopes to become a regular troupe member.