Hosted by Canadian artist Thomas Chambers, our latest podcast series,  “A Creative Space: NFTs, Web3 and the Performing Arts,” will give artists a deep dive into cutting-edge technologies and how they can be purposed as creative tools. Here, Thomas tells us more about the series– and where his interest in technology began. 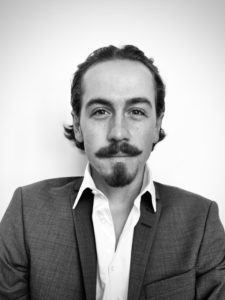 Thomas Chambers is a Circus Artist, Director, and Producer, based in Montréal, Quebec. Growing up just outside of Toronto, Canada, he has enjoyed a diverse background of performance from a young age. From being an actor on screen within the film and television industry, to playing many sports like hockey, baseball, badminton, and Greco-Roman wrestling, Thomas eventually committed himself to his passion of competing as a Trampolinist. After over a decade of trampoline competitions, participating in many Canadian National Championships—and, notably, the Indo-Pacific Games in Kakegawa, Japan, in 2010— he had the opportunity to join Les Productions Haut-Vol as a performer in Toronto. From there, he became obsessed with learning the discipline of Trampoline Wall (TrampWall). Using the skills he learned from sports, Thomas set out to push the limits of this apparatus and kickstart his career as a professional Circus Artist. This career has since taken him across the globe, from performing with the Catwall Acrobats in Big Tops pitched in countries such as France, Germany, Switzerland, and India, to spending four years as a TrampWall Artist with Cirque du Soliel’s JOYÀ in Quintana Roo, Mexico.

Meanwhile, as his performing career grew, Thomas aspired to take the artistic concepts and ideas he had dreamed of and materialize them on the stage as an Artistic Director. Since 2015, he has been the helmsman of over a dozen circus-based productions as a director and choreographer. He has also worked with a diverse cast of artists and disciplines across Canada and the United States as a director for Les Productions Haut-Vol, and with The ELEMENTS Show alongside Juan Elena in Playa Del Carmen, Mexico. Most recently, he co-created the short film FOUND STRANDED (Winner of the Founders Award at the Circus International Film Festival) along with Didier Stowe, Veronica Herrera Munguia, and Shannon Gélinas, produced by Les Improduits.

Thomas recently took the time out of his busy schedule to answer some of our most pressing questions. He shares what he’s been up to lately—and what we can look forward to in the podcasts to come.

CircusTalk (CT): It seems that your rich performing career is not enough for you, because lately, you have been adventuring into even newer, further spaces still strongly connected with circus.

Thomas: Yes… I am inspired and motivated to be as creative as possible within the arts and circus industries. As I perform on FLIP Fabrique’s new creation MUSE (currently at Edinburgh Festival Fringe), I continue to build projects off stage, from producing/writing/performing in my own circus-based short film about the struggles of anxiety to diving into the intricate and exciting world of NFTs and Web3—and all of this while attending McGill University for a Professional Development Certificate in Executive Production in Creative Industries. I am grateful to be surrounded by such creative environments and to collaborate with beautiful people and their artistries.

Dream, Create, Inspire. This is the motto I live by, and I am excited to see what creative adventures are yet to come.

CT: When and why did you become interested in new technology, and how do you think it will impact the performing arts in the future?

Thomas: I became interested in this new technology while working on a project with DROP THE ACT, the collective I started two years ago with three friends and fellow Trampoline Wall Artists Carl Rom Colthoff, Didier Stowe, and Julien Roberge. During this project, we discovered this incredible world of NFTs and Web3 and began to dive into the creative potential this space can offer within our industry.

I feel that the potential of this space within the performing arts industry can have amazing benefits for independent creators and artists. This space not only allows the artistic community to own and monetize their own creative projects, but it provides an inclusive, decentralized platform to produce and fund your own projects without the restraints of an organization or company’s objectives. NFTs and Web3 are also incredible platforms to build a community to support one’s mission and artistic vision. As artists and creators, we live to be able to create freely in our own unique and abstract ways. This technology can be the key that makes this possible and opens doors to many more opportunities.

CT: Tell us a little about the series, your guests, and your topics.

Thomas: This series aims to inform and educate the performing arts community about the revolutionary technology of the NFTs and Web3 space. I think this podcast can provide an open and engaging conversation about what this space is, how it is being used today and what implications it can have for the future. We will be featuring a diverse collection of projects from creative professional artists and companies within the performing arts industry. From Theatre, to Circus, to organizations dedicated to creating more opportunities for creative minds using this technology, this podcast will outline these projects and their successes, the challenges they faced, and the exciting, unknown future this space has. The goal of this podcast is not to convince you that you must get involved in this space, but to give you a different perspective on how it can potentially benefit your own artistry in the future as it has for our talented and interesting guests.

Thomas Chambers’s podcast series “A Creative Space: NFTs, Web3 and the Performing Arts” will be available on the Circus Voices podcast, accessible via the CircusTalk.com platform, Spotify, or wherever you get your podcasts.

Elisa Tauro grew up in Toronto and, from a very young age dreamed of becoming a circus acrobat. 1 year

Do You NEED To Go To Circus School?

November 29, 2022 Eric BatesComments Off on Do You NEED To Go To Circus School?