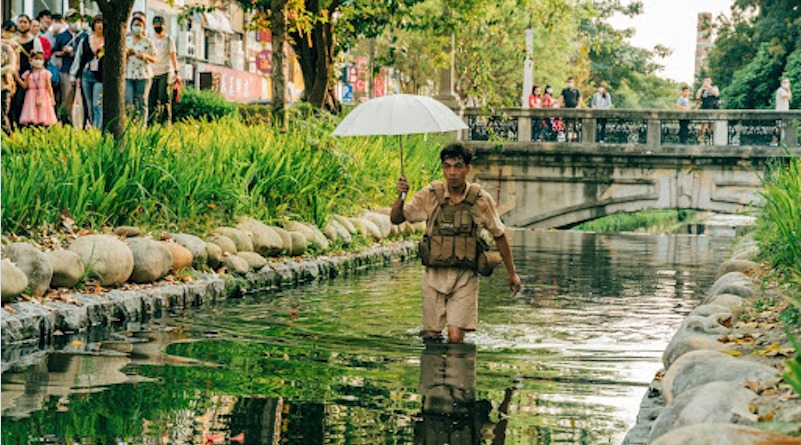 After a short period of pandemic early this year, life in Taiwan almost went back to normal in springtime. Since the end of March, performing arts activities (including the circus) have had a full capacity of audience. Artists and companies were able to present what they’ve been preparing for a long time in ideal conditions. The outbreak of the epidemic in mid-May put Taiwan back into the experience of the most intense prevention measures since 2020. It was almost like experiencing what other parts of the world had last year, with all public gatherings and art exhibitions canceled, venues closed, and eating in restaurants no longer available. After Covid hit, online shows seemed to be the main channel for performances.

Apart from the urgent relief package subsidy, the Taiwan Ministry of Culture soon put a series of performances produced by leading companies in the past into the “Arts Fun Theatre” project. Broadcasting for free on a Youtube channel, this project ran for 8 weekends with 94 shows by 47 companies throughout July and August. Though each performance video could not be replayed, it still attracted lots of people to join the streaming. Following this project, the Ministry of Culture also announced a new funding project: “Arts Fun Theatre – Online Stage” at the end of July which will be executed by the National Theatre and Concert Hall in Taipei, encouraging companies to provide ticket-selling online performances starting from November of 2021 rather than endless free shows. The selected companies will be subsidized from 400 thousand to 1.5 million TWD alongside the income they earn from the box office revenue. National Kaohsiung Centre for the Arts – Weiwuying also called for submission in early July for small online projects, in which the selection and subsidy will be conducted in phases with 100-300  thousand TWD each for shifting resources into the sector.

The epidemic for sure also influences the international market rapidly. The National Culture and Arts Foundation in Taiwan also modified the funding focus and criteria for “Performing Arts International Development Project”. The project used to fund long-term international collaboration and exchange, including production, networking, and platform establishment in the frame of a three-year-long period. Facing the unstable international market and its future, the funding will be back to an annual structure, and accept projects with digital, virtual/real integrated methods, e.g. concept touring.

Apart from the public policy, the private sector also showed rich vitality in adapting to the constraints. Cloud Theatre, an online performance platform, was created by Malaysian theatre practitioners and engineers Wei-Liang Yeh(葉偉良) and Hao-Feng Lee(李浩峰) in May 2020. After joining by Wei-Wei Wu(吳維緯), a Taiwanese theatre director, actress, stage manager, and professor, Cloud theatre has its version now in Taiwan. The most iconic characteristic of Cloud Theatre is that it represents the “ceremony structure” for theatergoers. Unlike any other apps for meeting purposes only, the platform provides an integrated system handling from purchasing tickets, selling souvenirs to broadcasting performance. During the show, the screen is divided into a stage section and an auditorium section, which feels just like when we are in an actual theatre. You can see who sits next to you, and also the playbill and other information show in the “Lounge” section by the side. The platform already hosts dozens of shows with audiences from more than 50 countries. The future impacts and influences of Cloud Theatre is worth looking forward to.

In the circus field in Taiwan, different companies and events also use digital tools to proceed with their plan. FOCA(Formosa Circus Art) and Phare the Cambodia Circus joined the exchange project initiated by Esplanade – Theatres on the Bay in Singapore using a zoom meeting. In this cross-country event, artists shared their working method and creation process to each other, and also exchanged their perspectives towards how the environment affects their practice, hoping it will stand as the foundation for future collaboration. The annual event – World Juggling Day in Taiwan organized by Hsingho Co., Ltd. shifted to an online version as well. This event has become a vital exchanging occasion from Taiwanese circus artists and jugglers, showing their current focus by playing together. Apart from all the “must-have” components accumulated in the past few years, the gathering this year added a new activity: a furniture-balancing competition. While everyone stayed at home, picking up the daily objects on the table or in the room to juggle with became an act reflecting the current situation at that time.

One company stood out during this time: “Lit Art” from Taichung, a city in mid-Taiwan. Established by Tzu yi Huang(黃子溢) and friends, Lit Art presented its first work “Flipped Old Town” just at the end of last year, already showing incredible creative energy in a promenade theatre form. This March and May before  Covid hit, the company presented “27 Squad” and “Revisit Taichung Salon” both directed by Huang, continuing to use the human body to tackle the urban texture and memory of different areas in Taichung. Especially in “27 Squad”, the performers led audiences on a walk from Mis-west district, across the Mid district to East district, a journey more than 1 km long in the heart of the city center reinterpreting theWhite Terrorhistory with games in urban space and circus bodies.

After the government took strict prevention measures, Lit Art was one of the very few companies to react by hosting an event that requires payment. At the end of June, Lit Art organized a 6-hour long “Micro Online Arts Streaming Project – A Proving Ground” event which included music performances during the dinner hour and bedtime, magic and yoga workshops, and of course different circus shows. By purchasing only one ticket, the audiences had free access anytime during that period. “Our purpose was mainly testing the use of digital tools and the acceptance of the audience,” said Huang. Huang also took the time to conduct research into the fire performance/fire dance in Taiwan and hosted an online sharing. From the definition of the term and form to the performative fire elements in Taiwanese folk culture and other foreign cultures, Huang laid out the history of fire performance in both west and east region, as well his reflection on contemporary fire performance.

At the beginning of August in Taiwan, the epidemic has slowed down significantly. Though no one knows whether the next wave will appear or not, we do see the private sector has shown its capability of responding to serious situations with flexibility and creativity. But did we learn from the epidemic experience and have enough resilience to face the unstable post-covid era still remains uncertain. The digital tools for sure speeded into our lives with a level we never saw before. How they will influence creative behavior, in essence, remains further observation.